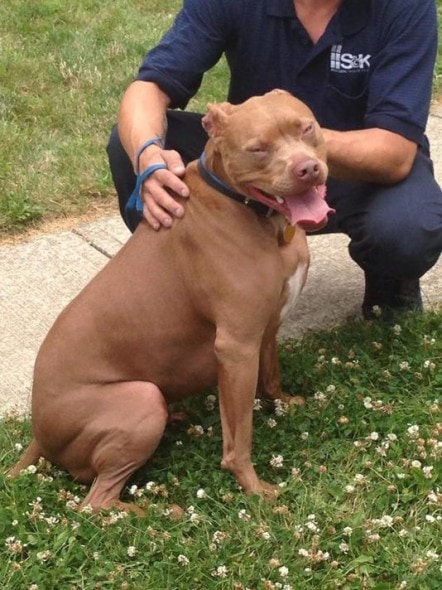 Ace, a 2-year-old pit bull is being called a hero today after helping his deaf owner escape his home which was on fire this past Wednesday.

By the time the Indianapolis firefighters arrived on the scene, the flames were so huge they were shooting from the top of the garage.  Also, Nick Lamb, whom is 13-years-old and deaf, was lucky Ace was in the house with him.

According to official reports, Ace got over to Nick while he was sleeping when the fire started.  Ace was able to wake Nick up by repeatedly licking his face.  Eventually, Nick was able to get out of bed, and was lead out of the house and to safety by Ace.

“He was thankful that Ace entered his room and licked his face until he woke up,” said Capt. Rita Reith of the Indianapolis Fire Department in a news release.  “The boy quickly covered his nose and mouth with his T-shirt, he darted out of the back door before calling his mother and 911.”

Nick credits his teachers and his school for teaching him what to do once he realizes there is a fire going on, and how to safely escape.  He may not have been able to grab a pair of shoes before getting out of the backdoor, but he did have his service dog Ace by his side.

“I couldn’t hear anything because I had my cochlear implants off.  My dog Ace smelled it (the fire).  I just wanted to get out,” said Nick.

Captain Reith also said the family’s cat, Pixie was located by firefighters as well.  She was a bit sick from smoke inhalation, but spent the night with a vet, and appears to be okay.

The cause of the fire is still under investigation.  The homeowners think it was electrical in origin, and was fueled by garbage.