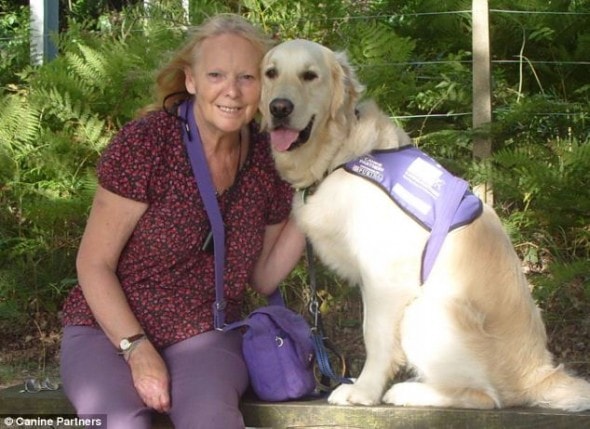 For Wendy Hilling a rare skin condition puts her life at risk on a daily basis. Her and her husband’s lives were turned upside down trying to manage it. Then a golden retriever named Edward gave them their lives back.

Hilling suffers from epidermolysis bullosa recessive dystrophic. The condition causes her skin to tear and blister at the slightest bump. It also affects her throat and can cause her to stop breathing. The condition made life difficult for both Hilling and her husband Peter. They had to take turns sleeping at night so he could make sure she didn’t stop breathing in her sleep. Her husband also had to stop working to help care for her.

In 2008 Hilling was paired up with Edward, a trained service dog from Canine Partners. The effect he had on her and her husband’s life was immediate. They are able to sleep at the same time because Edward is there to alert Hilling’s husband if she stops breathing. He does so by pulling his pillow out from under his head or pawing at him. While Mr. Hilling assists his wife Edward presses an alarm to call an ambulance if needed.

“Edward has proved to be so reliable at waking Peter that we can both go off to sleep knowing he will save my life,” said Hilling.

Edward doesn’t just help the Hillings sleep better but is there to help with everyday tasks that have become extremely difficult for Wendy Hilling. He also provides her with a lot of comfort.

“His companionship and his loyalty are the best thing about having him,” aid Hilling. “He is always there for me. I have reduced my painkillers since having them.”

Edward has become so important to Hillings care that when she is admitted into a hospital he comes along and the nurses appreciate his help. Edward takes on some of their tasks as he is better suited for them.

“The nurses have also found that he is the best one to undress me as he causes less trauma to my skin when he does it – no-one is as gentle as he is,” said Hilling. “If a human dresses or undresses me, they might catch me with a nail, but Teddy is so gentle the nurses prefer to let him help me.”

Edward has saved Hilling’s life on multiple occasions, but has also given her a life worth living.

“I never thought I could be this happy,” said Hilling. “I have gone from being constantly afraid of what people think, to the outgoing and carefree person I am now thanks to Edward and Canine Partners. I love Edward more than words can say, after all – I hold his lead and he holds my heart.”