Phil Newton says he did a double take when he watched a dog driving a 20 ton double-decker motor home down Winnellie Rd. in Darwin, Australia’s industrial zone. 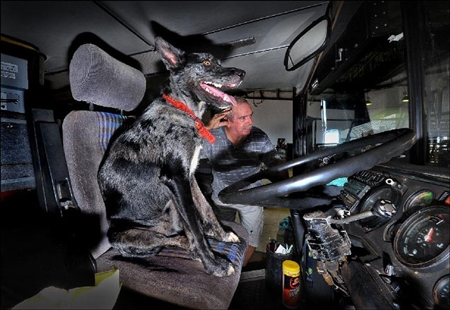 Mr Newton said it would not have been such a comical sight had the dog not been sitting in the driver’s seat with its paws on the steering wheel.

Once the shock wore off, Newton pursued on foot, chasing down the runaway vehicle, jumping through an open window to grab a handbrake – the same one that ‘Woodley’ had releaed in order to steal the massive vehicle.

“It ran for a couple of hundred meters, swerved across the road, went up on the footpath and was just about to run into a parked car when I stopped it,” Nelson told NT news.

Woodley, a two-year-old German koolie, was said to be happy and unrepentant when found sitting at the helm of the motor home when it finally ground to a halt.

His owner, Richard McCormack, 62, said that Woodley had obviously been paying attention on previous road trips. “He sits next to me when I’m driving and in the driver’s seat when I’m not. The handbrake is on the dashboard and he’s seen me release it many times. He was just copying me.”

McCormack had parked his mobile home in order to visit a local mechanic to schedule repair work when Woodley made his move, releasing the handbrake and taking is RV for a spin.

“I came out and saw the bus going down the road. I couldn’t believe it,” McCormack said. He also said he had plans to modify and fortify the handbrake to prevent Woodley from taking future solo joyrides. That aside, all is forgotten.