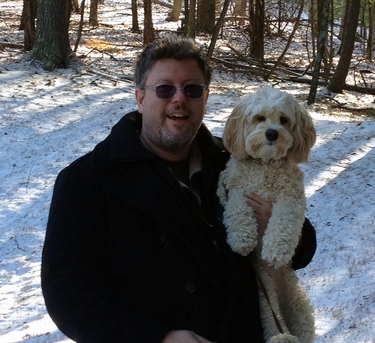 Eric Peterson was devastated to come home last Thursday and find his house had been broken into. His concern wasn’t for any of his material possessions, but his dog Margo. She was gone, but only 48 hours later she was safely back with Peterson.

When Eric Peterson walked into his home and found it ransacked he was immediately concerned about his 2-year-old cockapoo Margo.

“The first thing that I did was run up stairs to make sure the dog was OK and, unfortunately, the dog was gone,” said Peterson.

Peterson quickly called police, but it wasn’t until later when the shock wore off that the loss of Margo really sunk in for him.

“I phoned it all in and then called some friends of mine and basically fell to pieces and Friday was about the worst day ever,” said Peterson.

Peterson began posting missing dog posters all over his neighborhood and his friends were spreading the news on social media. Peterson worried that Margo was scared or even worse mistreated, but he held out hope that whoever took her was taking care of her.

“The fact that she was taken with her food and her leash and a lot of her toys told me that she was with someone that at least wanted to keep her healthy,” said Peterson.

Peterson also had hope that Margo would be found knowing she had a microchip, but he worried about how long.

Fortunately it wasn’t too long. 48 hours after the break in police received a tip. They went to the apartment of 19-year-old Reshawn Devonta Peay where they found electronics and more importantly a dog. Police called in the good news to Peterson.

“Getting a call from the police that they had a dog sitting next to them that they were pretty sure was mine was about the best thing ever,” said Peterson.

Police found a lot of other items of Peterson’s at the apartment, but he says all he cares about is Margo.

“I have the dog back and that is the most important thing,” said Peterson.

Peay was arrested and charged with second degree burglary, and has been linked with other burglaries in Northeast Washington D.C.

Top Dog Food for Collies
PureLUXE
Satos are Puerto Rican Street Dogs, and You Can Adopt One
Dog Food for Mastiffs
Do German Shepherds Smell? Why & How to Make Them Smell Better
Stella & Chewy’s
Best Dog Foods for Miniature Schnauzers
Killing Flees with Diatomaceous Earth Powder

1 thought on “Dog Stolen in Burglary Reunited with Owner”