A 16-year-old girl in Chula Vista, California is crediting a dog with foiling a man from abducting her off of the street.  Thanks to her walking this dog, the young woman survived to tell the tale, but the man in question is still at large.

Joanna Bojorquez was saved by a dog named Willow when a man stopped and tried to abduct her this past Saturday.  Now she doesn’t even want to go to sleep, afraid of having to relive the awful experience in her nightmares.

Joanna had been walking Willow as a favor to the manager of the trailer park that her grandmother lives in when the incident occurred.  A man in a black Camaro pulled up alongside her, and tried to force her into the car.

“He runs out of the car and bear hugs me; throws me in his car and while that happened, I lost my grip of the leash,” said Joanna.

She said that after that, details get kind of fuzzy.  She’s not sure that she remembers screaming for the dog, but Willow sprang into action as quick as she could.

“I start kicking, trying to move him away from me and luckily Willow saw that we weren’t being friendly and she throws herself on him.  He moved out of the way and I ran and we were able to get home safe,” said Joanna.

Then, the suspect sped away from the scene.  Joanna was very shaken up by the whole thing, and Willow tried to comfort her as best as possible.

The man in question is still at large.  Police describe him as between 25-35 years of age, is about six feet tall and somewhere around 180-190 pounds.  He was reported to have short brown hair and a goatee.  Anyone with information on the man is urged to contact the Chula Vista Police Department at 619-691-5151. 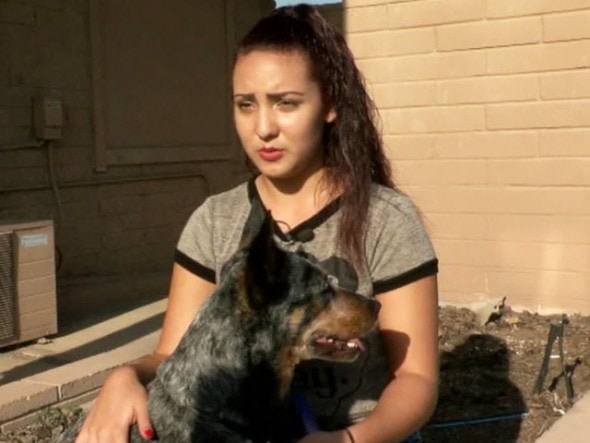