A Westby, Wisconsin dog is lucky to be alive after taking a wild ride through a sewage treatment plant. 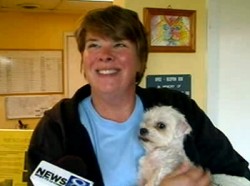 A plant operator was on duty Thursday when he noticed that a dog had entered the facility. After calling police he joined an officer in attempting to secure the frightened stray, but neither could get close enough to catch it. Not only did their last attempt fail – it spooked the pooch, who jumped into a channel of raw sewage to escape them.

After a brief but aromatic swim session, the dog was pulled from the murky waters. “We took him in after we caught him and gave him a little warm bath and washed him off and sent him to the pound,” says Sewer Operator Eric Miller.

‘Angellina’ was taken in by the Vernon County Humane society, where she’ll be monitored and fattened up a bit – she is thin and somewhat weak, but thanks to her rescuers she has a second chance at life, and is expected to be just fine.