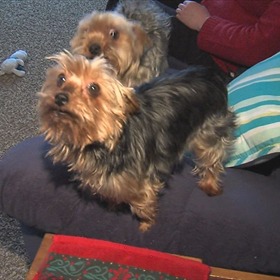 Last week Laura Emmons let her two dogs out. One of the dogs, Zoey, never came back. For five days Zoey was missing until the Emmons found her in a place they never expected.

Laura Emmons let Zoey and her other Yorkie out in the yard like normal but when she went to let them back in Zoey couldn’t be found. “I got my husband, my father and everybody else that we could find…looking, searching for her and couldn’t finder her,” said Emmons.

All the bad scenarios started going through the Emmons’ mind. Living in a rural community they thought maybe a wild animal had gotten her. The family was devastated over their missing dog. “I couldn’t even talk, when I tried to tell people I work with I couldn’t talk, I’d start crying,” said Emmons.

Just when Emmons thought Zoey was gone forever her son told her he smelled something odd coming from his car engine. When they popped the hood they got a big surprise. There was Zoey filthy and shaking but alive. “We couldn’t believe she was alive,” said Emmons. “Never thought to look for a dog under the hood of a car.”

Zoey most likely wound up in the engine after chasing a squirrel up under the car. Zoey was very dehydrated and weak when found, but otherwise had no injuries and is expected to make a full recovery. Remarkable since Emmons’ son had driven the car three times since Zoey went missing. “We’re so grateful. We couldn’t have gotten a better Christmas present than having her back.”