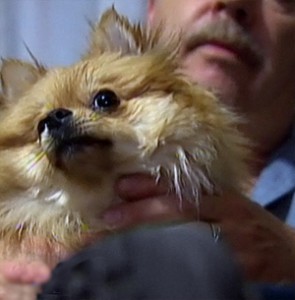 A Boston area dog owner says his dog is lucky to be alive after a hawk attacked it in his yard and attempted to carry it away.

“She was torn up so badly that we were just devastated,” said Tom Handwerker of his Pomeranian, Molly, who ended up getting 54 stitches in her back after the hawk carried her some distance before dropping her in the yard of a neighbor, dislocating her hip. “At the time we never considered anything like that could happen,” said Tom Handwerker.

For two long days Handwerker could not find Molly. He’d left her in her outdoor dog run while he was at work, and returned home to find her missing. After an arduous search, Handwerker found his lost pet in the care of local animal control, who said it was the most vicious raptor attack on a pet that they had ever seen. “It’s pretty scary, and I worry about…somebody leaving an infant in the carriage and going in the house…you just don’t know. A baby’s the size of a small dog,” said Kathy Comeau with Lunenburg Animal Control.

Area residents are warned not to leave dogs under ten pounds unattended, or to at least cover cages or runs if dogs must be left alone.