On September 11, 2015, Koko, a four-year-old chocolate lab from Chesterfield County, Va., was out exploring her yard when she encountered copperhead and suffered a snake attack. The snake bit the dog on the face and minutes later the dog’s face was swollen and oozing puss. If it wasn’t because the dog was rushed to a vet in time, Koko would have not survived. 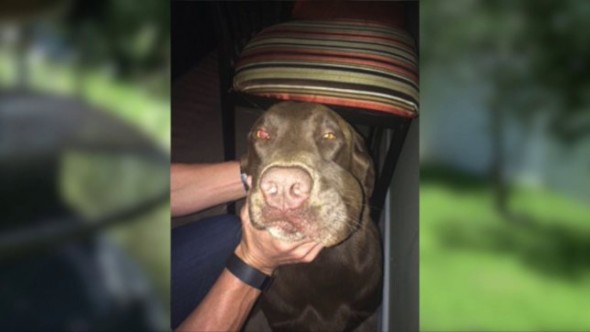 The dog’s owners, Karen and Jamie Meyer weren’t home when the accident happened, but when they returned home, they found their dog whimpering, in pain and scared.

Not knowing what had happened and fearing the worse, the dog owners contacted their vet and soon after rushed Koko to the clinic.

“The copperheads have been out in droves,” Dr. April Rice with Winterfield Veterinarian Hospital told WTVR News. “They definitely can be lethal especially if they aren’t treated. Dogs can go into shock, they can start to have issues with blood clotting and other systemic effects of the copperhead venom.”

The dog was treated with antibiotics, anti-inflammatory and an antihistamine, and a few days later Koko was back to normal.

The Meyers are cautious about letting Koko or their eight-year-old son out in the yard, the last thing they want is for a snake to attack their loved ones again.

34 thoughts on “Dog Survives Venomous Snake Bite to the Face”