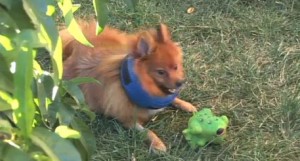 Meet Red, a rather unusual specimen. Red was born with both male and female reproductive organs. Sharon Blechinger, director of the Helping Every Animal League (HEAL) paid out of pocket to have gender reassignment surgery performed on the dog. Now he is recovering and ready to go to a new home. Fifteen people have applied to adopt the lucky pooch thus far, but a decision regarding his final home will not be made until August 20th.

Sources close to Red say he is relieved to know that he will not be remembered as the first dog in history to not ever want to go out. 😉