Adam the Lab mix was completely miserable.  His skin itched and oozed, the cause was a mystery, and relief seemed an impossibility.  But staff at the shelter where he lived refused to give up on him, and an answer was finally found – he’s allergic to humans!  Now he’s on the right medication and being pampered by his new mom.

The poor, sickly dog was due to be euthanized last July at Indianapolis Animal Care & Control, but Lucky Dog Retreat Rescue saved his life.

“When we first saw him, he looked just absolutely miserable,” LDRR president Robin Herman told ABC News. “His skin was just seeping. He felt like Vaseline. Reddish-pinkish fluid would just ooze out of his skin.” 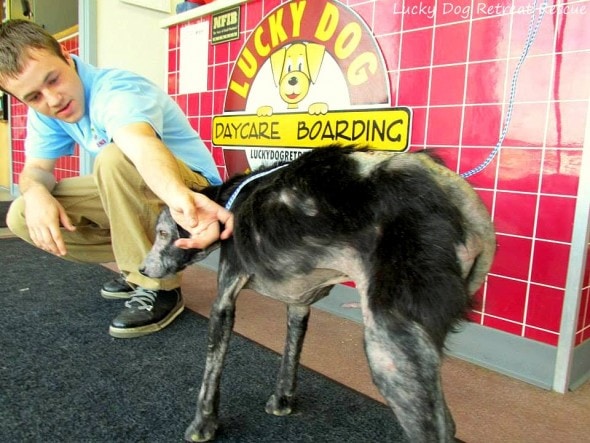 Staff of the rescue and the Animal Medical Center suspected that the one-and-a-half-year-old dog was afflicted with flea dermatitis.

But as months passed, Adam’s condition didn’t improve.  Caretakers hated seeing him suffer, and weren’t any closer to figuring out what was wrong with him.

“He was probably on a cone for six months, and at one point, we thought we might have to put him down and out of his misery,” Herman said.

But in late October, the mystery was solved.  Dr. Rachel Anderson concluded from Adam’s blood tests that he was allergic to human dander.

“It was a really interesting phone call,” Herman explained. “She was like, ‘You’re not going to believe what he’s allergic to! It’s really remarkable, he’s allergic to humans the same way some people are allergic to dogs and cats.”

He was also found to be allergic to cats, some insects like cockroaches and houseflies, some pollinating plants, and walnuts.  He is now regularly seeing dermatologist Lori Thompson at the Animal Dermatology Clinic of Indianapolis.

She diagnosed him with the autoimmune disorder pemphigus foliaceus, wherein the body “develops a ‘self-allergy’ to the ‘glue’ that holds his skin cells together.”  She noted that animal allergies to human dander are not all that uncommon, and that Adam’s allergy is not what caused his skin lesions.  However, he has vastly improved since his diagnosis.

“He’s come such a long way since Dr. Thompson started treating him,” Herman said.  “All his fur is back except for a little spot on his butt and tail. Though he’s going to be on medications for the rest of his life to help with the autoimmune disorder and allergies, he’s now on the road to full recovery and health.” 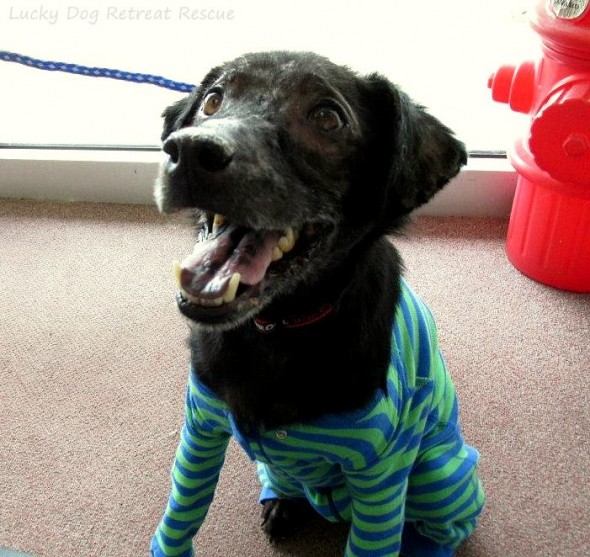 After word spread about Adam’s intriguing condition, people from as far as Australia sent in donations and adoption requests.  Nevertheless, a more local home was found for him with Beth Weber, the rescue center employee who has spent the last year tending to him.  She’s already familiar with his medications, and has a routine of bathing him every three days with alternating soaps.

Herman says now that the “little stinker” is feeling better, he’s been on a “mischievous streak” at the center, where he still frequently visits.

“He loves to climb in a laundry basket and get comfortable in the warm, fresh laundry, and you can see him smile and be coy,” she said.  “He’s got a great sense of humor about him. He’s absolutely adorable.” 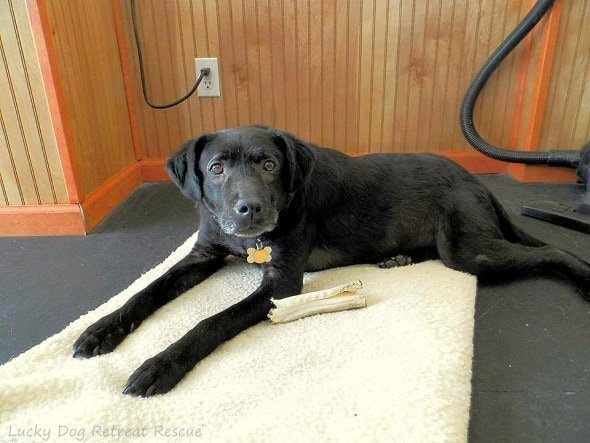