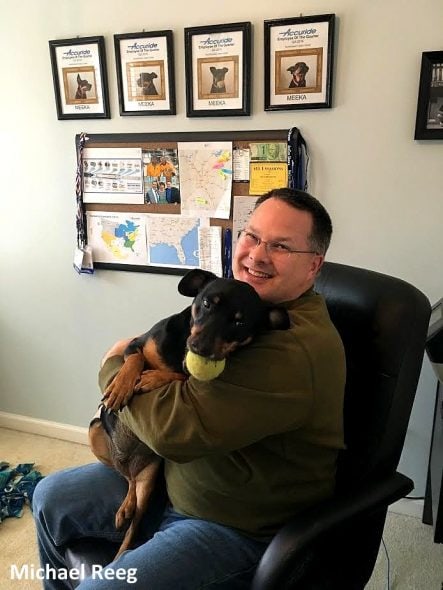 Meeka is such a good girl – so good, in fact, that she’s been the Accuride Employee of the Quarter for four consecutive quarters.  However, as her dad works from home and is her employer, we think the nomination might be biased….

“I was not surprised at all when my dad first showed me the framed picture of Meeka as employee of the quarter because Meeka is very loyal to my dad and his (their) work,” Madison Reeg told The Dodo. “I just thought it was hilarious.”

Michael Reeg is the district sales manager for the drawer slide manufacturing company, and last year began working from home.

“Transitioning to a home-based position was quite a change,” he said.  “It’s quiet here. You need to get yourself fired up and excited about the day. Having a faithful companion in the office certainly helps.”

So he put Meeka to work.  She doesn’t really know much about the company’s product line or marketing, but she’s always there on time and makes a great sounding board. 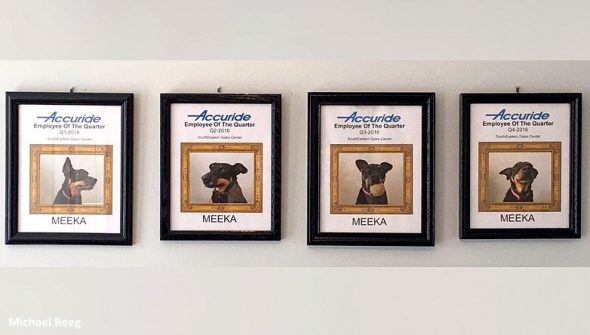 “There are times that I’ll even talk to her as I work through a problem or map out a customer solution. I try out my sales pitches and presentations on her. She’s not easily impressed or swayed,” Michael explained.

“All she hears is ‘blah, blah, blah, Meeka’ — but she likes to hear my voice and I love that she pays attention. Having her in my office all day is something that we both look forward to.

“If my office door happens to be shut she will spend the day laying in front of the door, just in case I’m really in there.  In my opinion, that earned her the title of Employee of the Quarter.”

Meeka isn’t his only employee, however, so she’s not the only one in the running for the award. The Reegs have another dog, Kya, but she’s not nearly as industrious. 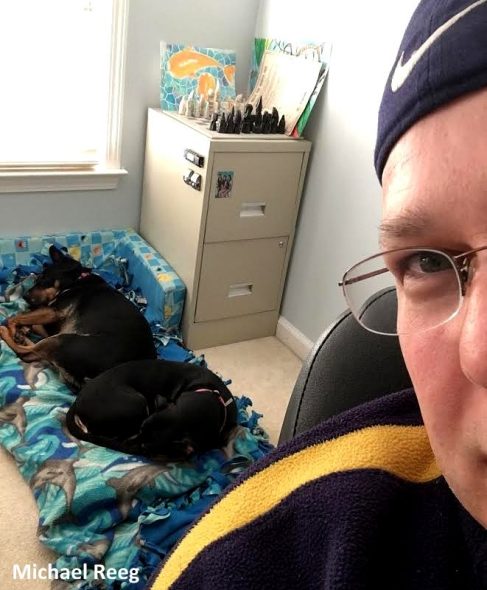 “She is really my wife’s dog, so she only comes up to the office when my wife is gone. We are her second choice for company!”

But who knows – she may yet be a real contender for the coveted award.  Michael doesn’t want Meeka to start resting on her laurels.

“I haven’t decided yet if the prestige is going to her head, or if Kya feels disgruntled,” he said. “Maybe a change is needed for one quarter, so that Meeka doesn’t feel entitled. I want her to stay sharp.”

She needs to continue being as dedicated to the job, especially because the corporate office in California is aware of her achievements.

“He sends an update after every quarter. Meeka is an outstanding support to Michael and his work,” an Accuride spokesperson said. “Dogs are the best.” 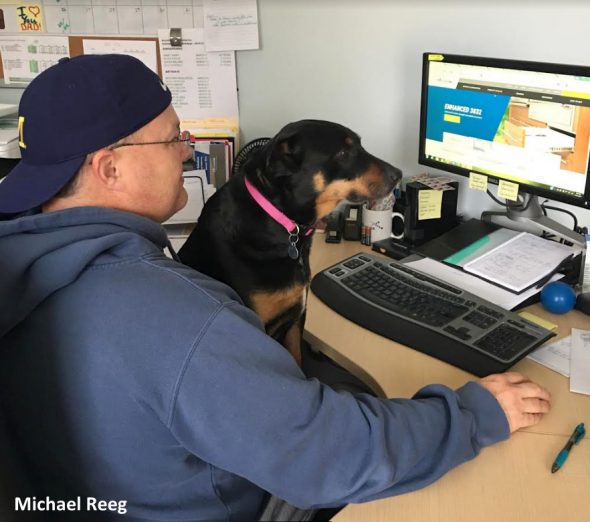