Dog lovers the world over know well that their pets help them through all kinds of stressful situations and certainly the loss of a loved one is no exception.

In Austin, Texas, an 11-month-old puppy is now in training to provide that comfort to families who desperately need it, not to mention those who make their living in the funeral industry.

Several months ago, mortician Melissa Unfred adopted Kermit from Fuzzy Friends Rescue in Waco, and he has proved to alleviate quite a bit of her own job stress. While she enjoys helping others through a difficult life situation, it’s a difficult road.

“My job is really hard,” Unfred told ABC affiliate KVUE. “We’re faced every day with tragedies and sad situations and it can take a toll on you over time.”

The border collie mix, she says, is a stabilizing force.

“He’s very positive in the face of death. He’s even helped me face these type of situations. Every day, I’m dumbfounded that I lucked into such a smart dog.”

She realized early on Kermit carried himself differently when he was at the funeral home.

“His demeanor would start to fit perfectly with the situation,” Unfred said. “A lot of people have been really surprised that he’s not hyper. You see that as a hand will go out to pet him, it’s like an immediate sigh of relief. I’ve seen it over and over again, whether we’re at a funeral or a nursing home or somebody has just passed away, he is there to be a calm presence.” 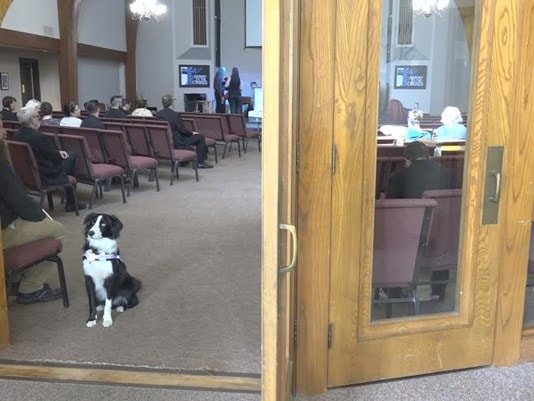 Unfred works for Affordable Burial and Cremation Service in Austin. The business’s owner, Robert Falcon, sees the impact Kermit has on the customers.

“When he shows up, he calms the room. Kermit has a presence to him,” says Falcon.

Falcon added that sometimes, when someone starts to break down in his office, Kermit seems to come in at just the right time.

“There have been times …” Falcon said “…when I’m sitting there at the desk with the family going through a tough moment, and he will come up and introduce himself. He will just sit and have a presence. He has a knack to find the person who is hurting the most.”

Unfred has also noticed Kermit’s ability to go to the person in the most pain.

“He can kind of sense the energy in the room,” Unfred said. “Sometimes I will start to go upstairs and Kermit isn’t behind me. He ended up staying behind and Robert has seen him in action. He just moves himself into the position where he’s closest to the primary griever.”

Kermit already has his good citizenship certification, as he is now just a few weeks from turning 1. Once he hits that first birthday, Kermit can be certified as a grief therapy dog, making him the first therapy funeral dog in all of Texas.