Dog with Jug Stuck on Head for Three Weeks Rescued 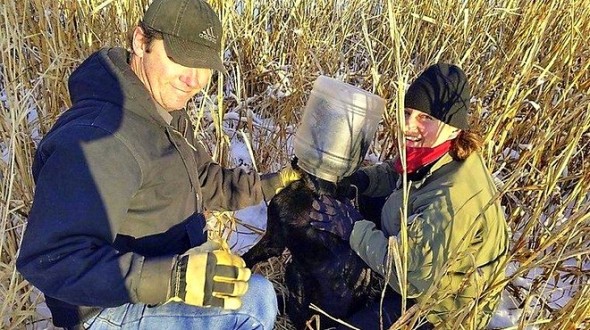 A dog whose head was purportedly stuck in a jug for three weeks has finally been caught and freed from his plastic prison.  Now the search is on to find him a home.

It is highly unlikely that any dog could survive more than a few days without water, but that’s how long his rescuers believe he was trapped.  However, it is possible that condensation built up and was able to be licked off the inside of the container.

“His big ears kept him from getting it off,” Katherine Nelson told KARE 11.

Minnesotans Katherine, her husband Don, and Sue Leach learned that the poor Lab was wandering around a North Manako park, and spent several days trying to catch “Jughead.”  They set a live trap with food in it, but that obviously wasn’t able to work.

On Wednesday morning they went to check the trap, and came across fresh paw prints in the snow.  Sue and Don were led to a swampy brush, where they discovered Jughead sleeping.  Don gently scooped him up, and though he initially struggled, the starving and scared dog eventually allowed his rescuers to load him into a van and get him to the Minnesota Valley Pet Hospital. 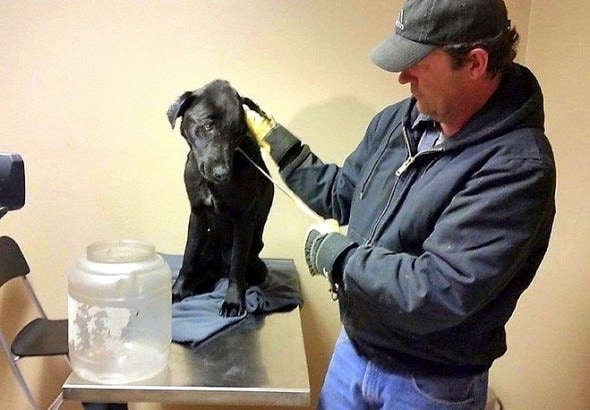 “He didn’t have much time left,” Katherine noted.  “Someone would have walked up and found him dead.”

With a little assistance at the vet, Jughead was able to wriggle free.  Staff at the animal hospital are donating their services to the stray, who endured the entire harsh winter outside.

When he is well enough to be released, the Nelsons will foster him on their farm until they can find a good home with a fenced yard for him.  This will give him time to learn how to socialize with people and other animals, as well as learn some manners.

She wants to remind people to properly crush containers like that jug before recycling so other animals do not wind up in the same situation. 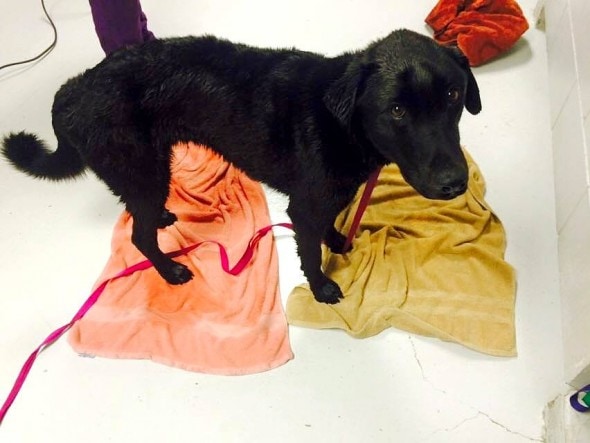 Though he doesn’t look it, staff say he was very happy with the bath he was given.