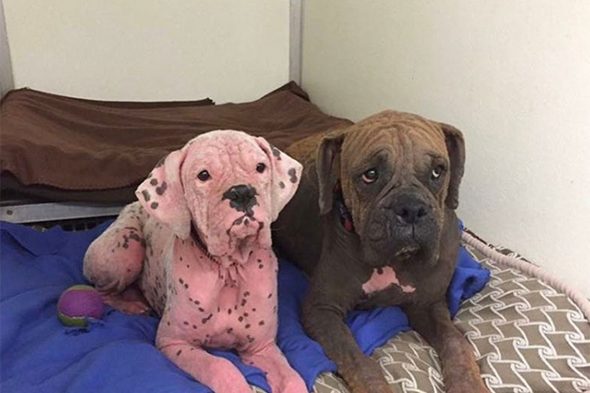 The Animal Friends of the Valley shelter in Wildomar, California never really knows what is going to happen during their overnight hours.  It’s not at all uncommon for someone to just abandon a dog or two at the shelter during the night hours, and on the night of February 13th, someone dropped off two dogs there, and one had mange so bad she had gone pink.

The pair that were abandoned were brother and sister, and both were suffering from demodex mange.  They’ve been renamed by the staff at the shelter as Asia and Artie, and even though someone dumped them off at a shelter, they didn’t exactly leave them with any history or information, so the shelter staff knew they had to get to work fast on figuring out how to help them the best. 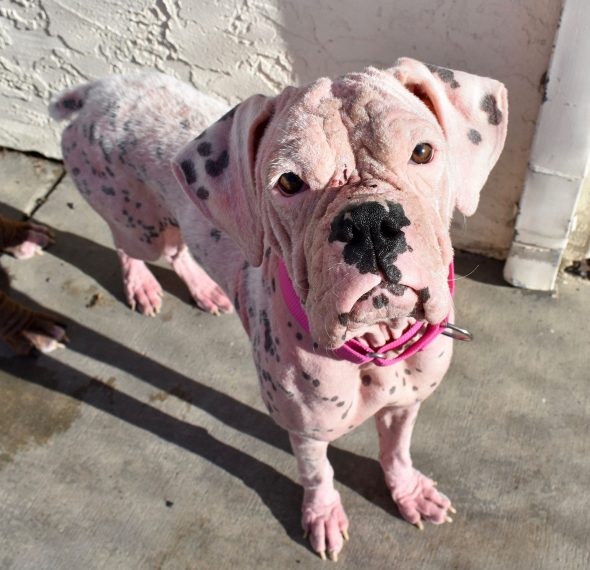 “I felt so badly for Artie and Asia when I first saw them,” says Jennifer Glover, a registered veterinary technician for the shelter.  “But I was encouraged by the fact that we would be able to start helping them.”

Glover was the first to meet the dogs coming in the morning after they were abandoned.  One can only imagine the sadness and confusion they felt just sitting there.  It really has to be difficult for a dog to figure out exactly what they’ve done to be treated like that. 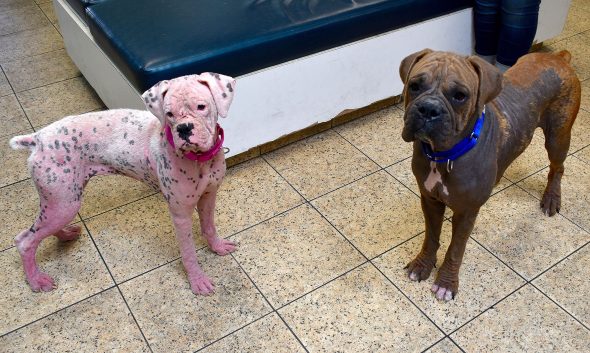 “They were very sweet when they arrived but they were depressed,” Glover said.  “Within just one day of having someone care for them here, they were so much happier and more outgoing.”

After a bit of TLC from the staff, and some much needed medical care, both dogs are doing very well.  Regardless of just being dumped at the shelter, they are a happy pair, and love to love.  They will be searching for a forever family soon, and the good people at Last Chance at Life rescue have promised to do everything they can to help things along.  If you’d like more information, you can click here.