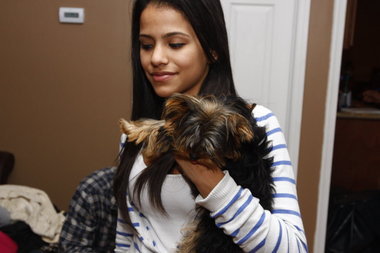 Caught on a surveillance camera : A woman in a hooded jacket walking up to Tabitha Almeida’s porch, scooping up the 6-month-old pooch Amira, slipping her into the jacket and walking off.

Almeida’s family went on a mission posting fliers in their neighborhood,  giving a copy of the video to local media outlets. Eventually someone called in an anonymous tip about a teenager nearby with a new dog matching Amira’s description. Ms. Almeida’s sister, Blaise Guerin, and Guerin’s son staked out the suspect’s house, reasoning that the teen would likely have the dog with her if she went out.

Khadieja Jones, 18, exited the home that afternoon with two bags, so Guerin followed her to a bus stop and confronted her. Jones denied stealing the dog, opening one of her bags to show that it contained nothing. Guerin requested that Jones show her the contents of the second bag, but Jones declined and attempted to jump into a city bus.

Guerin grabbed Jones in an attempt to stop her from getting on the bus, and a local police officer noticed the scuffle. As he questioned the two women Amira heard the voice of her owner and started squirming in the bag Jones had refused to open.

Jones was arrested on the spot. Amira is home – and safe, with her very dedicated family.

13 thoughts on “Dognapping Victims Take Matters Into Their Own Hands, Recover Dog”