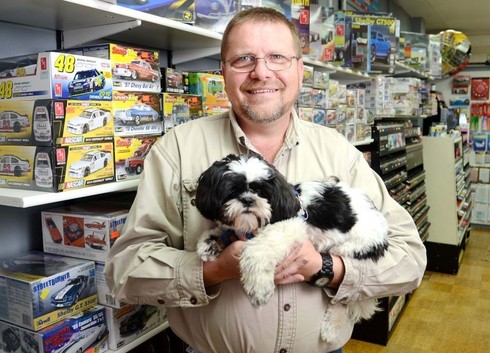 Revo, a 9-month old Shih-Tzu, usually is very welcoming to visitors of Chippewa RC Hobby, a store in Chippewa Falls, Wisconsin. When 17-year-old Jason Mooney came into the store Revo was not his usual welcoming self. Revo started barking and growling at Mooney. Revo’s reaction helped let his owner, store owner Doug Twerberg, know that something wasn’t right.

Mooney had brought in a remote-controlled hobby car that he couldn’t get to run. Upon Revo’s reaction Twerberg made sure to take a good look at what Mooney was up to and had brought with him. Twerberg had received a phone call from a burglary victim just a few days earlier who had a remote-controlled hobby car stolen. Twerberg’s was the only hobby shop close by, so the victim alerted Twerberg about the stolen hobby car.

Mooney told Twerberg he got the car for only $25 from a friend, the car is valued at $150. A close examination of the car, combined with Revo’s unsettling reaction to him, led Twerberg to call police right there in front of Mooney.“He didn’t run. He just stayed there. Froze, I guess,” Tweberg said. Chippewa Falls Police responded and arrested Mooney.

The arrest led to the discovery that Mooney and two of his friends were responsible for burglarizing or attempting to burglarize 22 businesses in Eau Claire and Chippewa counties. “They took everything from television sets, to alcohol, to computers,” said Detective Scott Kuehn. The boys apparently sold the stolen items to buy and sell drugs. The suspects are charged with several counts of burglary and have been released on bond.

Twerberg is shocked that Revo’s growling led to the arrest of those who were responsible for so many burglaries. Twerberg has been giving Revo extra treats all week “He gets pampered every day.”