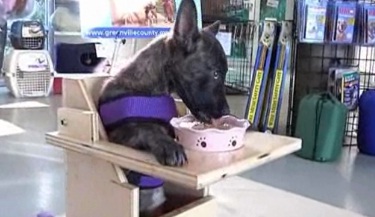 When Starship came to the Greenville County Animal Care Shelter in South Carolina on June 30th she was starving. The shelter is guessing the Australian Cattle dog-Shepard puppy is about 4 months old, but her growth is stunted so the vet hasn’t been able to age her exactly. Starship growth has been stunted due to a digestive condition which makes it impossible for her to eat or drink unless she is upright. So the shelter has built her a high chair to eat from.

One of the shelter workers, Kayla Sield, explained Starship’s condition, “She has a condition called Megaeophagus, which is where she has an enlarged esophagus that doesn’t allow her food to move down to her stomach like it’s supposed to.” Once the shelter diagnosed Starship’s condition they go to work on catering to her special need. They needed to build a chair, called a Bailey chair, to keep Starship in an upright position so gravity could pull the food down her digestive tract. “Our vet, Dr. Worl, her husband actually built the chair. He’s a contractor. She’s about outgrown the one she has now, so he’s going to be building a new one soon, “Sield said.

Starship had to get adjusted to using a highchair. She has worked with her temporary foster mom since she first got to the shelter to get used to being fed in a high chair. Besides her unique way of being fed, Starship is like every other puppy. “She’s like a normal puppy. Sweet and playful, she likes other dogs, people and is good with cats,” Sield said.

Starship is still at the shelter waiting to be adopted, and finding her the right family will be a little more involved due to her condition. “She needs to someone to be at home with her, preferably 24/7, carefully monitoring her so she’s not going to drink or get a treat without being in an upright position,” Sield said.

Megaesophagus is essentially the failure of the esophagus to work as it should. The esophagus stays enlarged and does not push the food down into the stomach. The food stays in the esophagus and is in most cases regurgitated. There is also a risk that the food can be inhaled into the lungs causing aspiration pneumonia. This is why it is necessary for the dog to sit for at least 10 minutes after eating or drinking. All food and liquid intake needs to be closely monitored and food needs to be administered in small quantities. Dogs like Starship need to eat 5 smaller meals a day typically. The Bailey chair has been the best development for handling this disorder so far.

Starship is not the only dog suffering from this disorder and Bella, another dog with the same disorder, has mastered her Bailey chair. See video below: