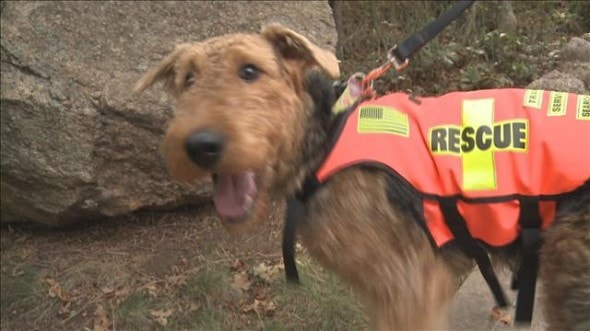 After almost 20 years of military service Karl Holfe returned home to Colorado Springs, but not without challenges. Diagnosed with severe anxiety, severe depression and PTSD, medications didn’t seem to help much. What did help was Jake, an Airedale Terrier who is a trained service dog.

When medication and counseling didn’t help Karl, Sharon wrote to Southern Sollars, a private breeder in New Mexico who donates service dogs to those in need. Jake’s full name is Sergeant Andy Perkins, named for a Northglenn soldier who died in Iraq in 2007. “This dog really helped [Karl] cope. Jake brought the joy back in our lives. We really needed that,” Sharon said. Sharon went onto say that Jake, “saved our marriage.” Jake became a part of their family, and they looked at him as a son.

A few months ago the Hofle family noticed something was very wrong with Jake. “He cries a lot. At home he cries more. He’s in such discomfort,” Sharon said. Even sitting down has become painful for Jake. The Hofle’s took Jake to the veterinarian where he was diagnosed with severe hip dysplasia. The veterinarian told the Hofle family that they could either operate or put Jake down. The surgery would cost $10,000, an amount the Hofle family could not afford. Karl has been looking for work since January and Sharon is recovering from a stroke. Karl and Sharon are also raising their 7-year-old granddaughter, Faith, who may need major scoliosis surgery.

The Hofle family can’t imagine putting their beloved Jake down. So they reached out for help. They set up an account for people to donate to and the local news told their story. On Monday the account was empty and by Tuesday evening nearly $40,000 had been donated to it. The donations have come from all over, including 15 different states and Canada.

“It’s unbelievable,” Sharon said. “I think it’s still going up.” On Tuesday afternoon Sharon called the vet to schedule the surgery. Jake is scheduled for surgery next Saturday. He will have one hip operated on then and then the other one 30 days later.

The community hasn’t just stepped up to help Jake, in the short time since their story broke two potential employers have contacted Karl and a landlord approved them to move into a more affordable apartment. For those wishing to make a donation, go to any Wells Fargo branch and tell them it is a Business Account for SGT ANDY PERKINS aka JAKE, and the last four digits of the account are 6390. A paypal account is also set up to donate to the family http://bit.ly/QXJI6A

2 thoughts on “Donations Pour in From All Over to Help Jake, a Service Dog in Need”