Don’t mess with mama! And although in this case, we COULD mean mama bears, we actually mean loving dog mamas!

Judy Milden is lucky to be in such good shape after the weekend she had. The Harrisonburg, VA, woman says she let her dogs out Saturday night and not long after heard alarmed barking. She told reporters for WHSV she figured it was raccoons. 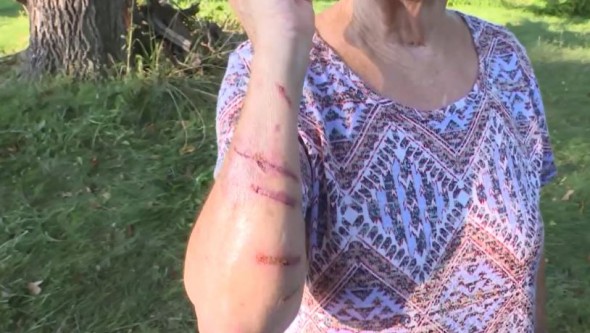 When she went out to check, however, she realized that a mother bear and her cubs had wandered into the yard. When the bear began to attack them, Milden says she stepped in without thinking.

The bear came after her, she says, knocking her down. Milden rolled down the slope of her yard and into her deck.

Milden’s collie survived the attack, but not unscathed. The dog suffered some serious wounds to his midsection, while Milden sustained cuts and scratches to her arm and legs.

Milden warns other people not to leave their trash where it can be smelled and says she’ll be refraining from even feeding birds to prevent such a thing from happening again.

“And I don’t want anyone shooting bears, either,” she noted.