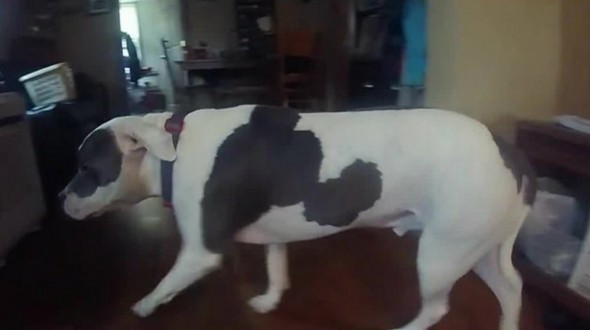 This past Wednesday, a woman wandered into a house in Trenton, Michigan, and started playing with the dog that resides there.  She then decided to raid the kitchen, all the while scaring the crap out of the ten-year-old boy she didn’t know was there.  The smart little guy managed to call police for help and protect his family home.

According to the police reports and the 911 call recordings, the boy heard the woman coming into his house and went upstairs to hide.  He told the police that he had grabbed his BB gun and had rolled under the bed to call them.

“Some random person is in my house trying to steal my dog,” said the brave young man to the 911 operator.

Police said that the woman was nearly naked by the time they had arrived, and she was in the kitchen raiding the fridge.  She made quick friends with the family dog, Grayson, and began to prepare some food she had located for herself and her new doggy friend.

“My wife had a crockpot of turkey in here,” said the homeowner.  “She must not have liked that, because she had the oven going and a package of meat out on the counter, some milk and hummus, and made a big mess on the counter.  Her nightgown was found a few blocks away.  She put on my son’s jersey — his football jersey — and my tennis shoes.  Then, I don’t know, she must have went out back with the dog to jump on the trampoline.”

Police are congratulating the young man for handling the situation the best way he could have.  That must have been really scary for a ten-year-old, but he stood up to the challenge, and saved his family home.

“He protected his house,” Jim Nardone, director of Trenton police, said.  “He protected the family pet. We’re proud of this young man.  He did a great job.  I’d love to sign him up for the next police academy. He’s a little too young, but maybe someday.”