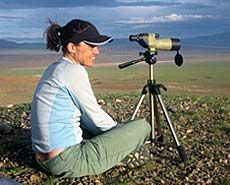 According to Utah State University wildlife biologist Julie Young, man’s best friend may not be wildlife’s best steward. Feral and free-roaming domestic dogs may pose a serious ecological threat, she says, yet few studies have explored the topic.

“Dogs, including feral and free-roaming dogs, live everywhere in the world people live but little research exists about their effects on wildlife,” says Young, a supervisory researcher with the USU-based predator research field station for the USDA-WA National Wildlife Research Center and research assistant professor in USU’s Department of Wildland Resources.

Young and colleagues reviewed wildlife-dog studies from around the world and described a case study they conducted in Mongolia in the article, “Is Wildlife Going to the Dogs? Impacts of Feral and Free-Roaming Dogs on Wildlife Populations.” The paper appears in the Feb. 3, 2011, issue of the journal BioScience.

With colleagues Kirk Olson of the University of Massachusetts, Richard Reading of the Denver Zoological Foundation, Sukh Amgalanbaatar of the Mongolian Academy of Science and Joel Berger of the University of Montana, Young observed interactions between free-roaming guard dogs belonging to nomadic pastoralists and three endangered wildlife species: Mongolian gazelles, Mongolian saiga and argali.

Young’s specific research in the study focused on saiga, a migratory ungulate whose population has experienced dramatic decline in the past 50 years. 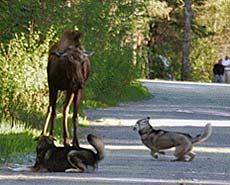 Most households in rural Mongolia own at least one dog, usually large and of mixed breed, she says. Pastoralists, living in portable yurt-like dwellings called gers, move their livestock from place to place and their ranges overlap sensitive wildlife habitat. Dogs are kept to protect homes but often roam freely.

“Through observation and radiotelemetry, we documented evidence of indirect and direct interactions between dogs and the three endangered species in our study,” Young says. “Through interviews with herders, we collected information about wildlife mortalities caused by dogs and incidences of wildlife being harassed by dogs.”

The case study, she says, indicates that dogs indeed pose a threat to wildlife and reveals the need for further studies to understand the effects of domestic canids on wildlife throughout the world.

Closer to home, a recent study in Colorado shows small mammals, mule deer and bobcats are increasingly shunning hiking trails frequented by dogs. A study in Idaho noted a significant number of chases and deaths of white-tailed and mule deer by dogs.

“Conflicts between dogs and wildlife may occur more often than people think,” says Young, whose local research focuses on coyotes and other wild predators. “Consequences may include decreased wildlife populations caused by predation stress and mortality, spread of disease and habitat loss. We need more information.”