On October 16, 2014, a group of 8th grade students from Bergman Academy, in Des Moines, Iowa, became heroes when they rescued a light colored dog trapped in mud. The teenagers were jogging around the drained Greenwood Pond as part of their gym class when they stumbled upon the pet in need.

The trapped dog wasn’t alone, he had a buddy with him who was standing guard and looking quite worried seeing his canine friend stuck helplessly in the muck. 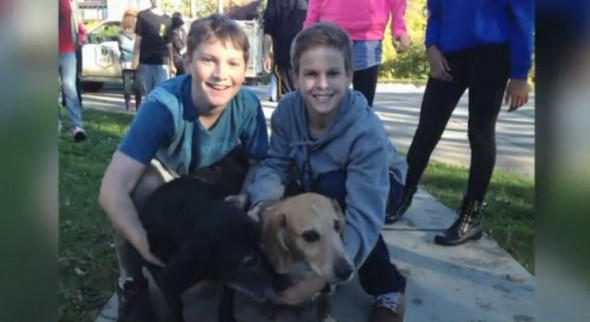 “It was a pretty short dog. It didn’t have very long legs so it was stuck in there pretty good and it couldn’t get out because its legs were too short,” student Maev Cleary told WHOTV.

The resourceful kids found some plank wood, laid it on the mud and reached the pet without getting stuck in dirt themselves.

“The black dog was right here and looking at the dog with concern. And then we put this stick down so then we wouldn’t sink in the mud when we tried to rescue them,” said student George Holtz.

The children pointed out that there were many other people – adults – in the park who were walking around or standing within distance of the distressed pets, but not one single adult did anything to rescue the dogs.

“The dogs were really scared at that time. They were like shivering and whimpering and all that stuff,” said student Nate Stenberg.

Once the dogs were safe the young rescuers were excited they had done something, the right thing, to save them.

Thanks to the dogs’ microchips, both pets were later reunited with their owner.