It was a boy — seven times — plus one girl for Eleanor Rigby (Ellie, for short), a service dog who went into labor unexpectedly as she and her owners were waiting to board a flight at Tampa International Airport.

Personnel with the Tampa Fire Rescue, which documented the birth on Twitter, helped Elle to deliver her puppies.

An airport spokesperson told Fox 35 that a woman and her daughter were flying from Tampa to Philadelphia. They were aware that Ellie was pregnant, but didn’t realize how far along she was.

The puppies’ father, also a service dog, was on-hand for the birth, as well. 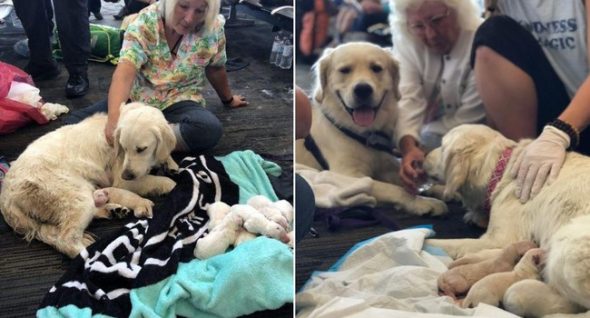 Although her humans missed their flight due to the birth, they were happy that Ellie and the pups were doing well and now plan to drive the 1,000-mile journey with the 10 dogs in tow, according to reports by the Miami Herald.