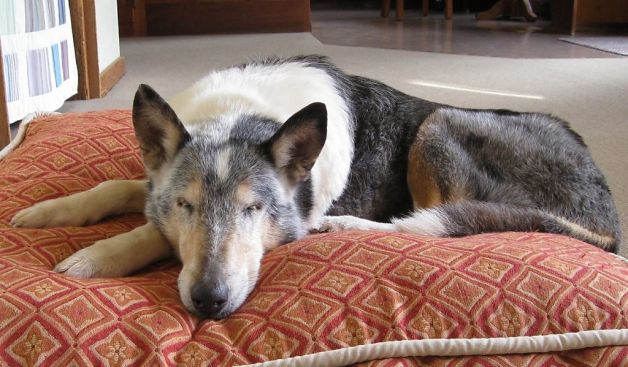 On a chilly night in January, Ron and Jan Ross of Arcata, California, were saddened to find their elderly dog, Ellie, had gone missing.  The 12-year-old collie was nearly deaf and suffered from cataracts.  She had been adopted eight years ago, and in all that time never strayed farther from the Ross home than the next door neighbors’ yards.  Her sudden disappearance came as a surprise.

“We posted paper notices on lamp posts and virtual ones on Craigslist,” Ron explained.  “We called shelters and alerted veterinarians because Ellie was microchipped and wearing an ID tag, but all for naught.”

The Rosses live adjacent to the Arcata Community Forest.  A couple who regularly walk the trail in the densely-packed redwood forest said they saw Ellie trotting tenaciously down a darkened trail.  After that, her whereabouts were a mystery.

Jan and Ron were sad and confused.  Why did Ellie suddenly leave?  Perhaps she was closing in on death and sought solitude.  Without any sure ideas, the Rosses began to lose hope that they would ever see their Ellie again.  But their faith was restored after a neighbor brought them a surprise.

Sixteen days after Ellie disappeared, a neighbor was hiking one of the trails when she heard a soft whimper.  Following her ears, she made her way into a deep ravine where she located a bony Ellie.  The wet dog had been trapped beneath fallen debris.  The neighbor brought Ellie home to an overjoyed Jan.  Ron returned from his morning job to find his elated wife with their dearly-missed dog.

“This experience has given us an increased appreciation for the dog-human connection as well as the human-human connection,” Ron said.  “People we barely know and people who have never met Ellie have communicated their genuine joy that Ellie has returned.  Our mail lady was positively ecstatic, with tears running down her cheeks as she hugged our dog.”

Ellie lost 17 pounds during the two weeks she was gone, but was otherwise determined to be healthy.  The Rosses have since made sure that she now wears a GPS collar.  She hasn’t been interested in any other solo adventures, but the Rosses will know if she changes her mind.