Army Private Hannah Foraker hadn’t ever really left home for a long period of time before until she went away to boot camp for three months.  When she returned, her elderly dog Buddy gave her quite a welcome.

“When I came home we let her outside and, at first, she didn’t realize I was home,” Foraker told ABC News.  “Then, she did a double-take and came back to me.  That’s when she started crying and whimpering.  She was so excited.”

Buddy became a bit of a shadow for the next two weeks while Foraker was home. She followed her everywhere she went, and seemed to show an energy that was reminiscent of her younger years!

Buddy is a senior dog, and she is suffering from hearing loss and arthritis.  However, Foraker and Buddy do get to keep in touch via Skype while she’s not home.

“I hope to see her again next time I’m home during Christmas,” she said. “She will be all right; she’s a fighter.” 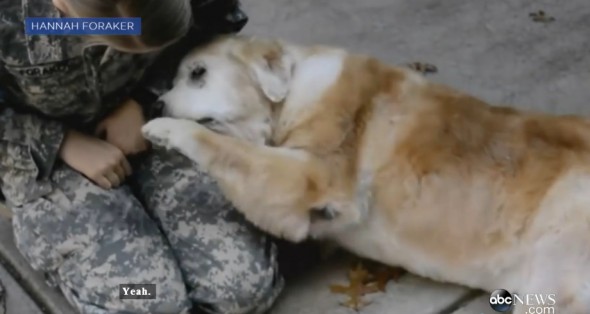