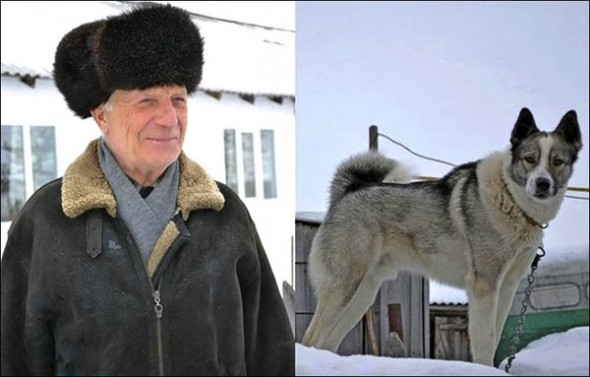 Anatoly Chernenko from Russia was out taking a walk with his dog one day, and fell into an ice hole.  Being dressed for very cold weather made the situation that much worse.  The extra weight was enough to keep the 77-year-old man from pulling himself out.  Lucky for him his dog knew exactly what to do, and Chernenko is alive to see another day.

Dick is a very smart dog.  He started making all kinds of noise, and attracted Vladimir Karablin.  Karablin came running to where the commotion was coming from, and saw Chernenko’s predicament.

“I was on my snowmobile and suddenly saw a Laika (dog) running on the lake’s shore.  I thought, ‘Weird, what is a dog doing on wasteland?'” said Karablin in an interview with The Siberian Times.

Karablin said he actually recognized Chernenko, as the two used to work not far from each other.  He could see the fear on the man’s face, and knew that going to get help from all the way out there was not at all going to be possible.  He started trying to make his way over, but Dick became protective, and went after Karablin.

“He was thinking he’s protecting his owner,” Karablin said.  “So I had to fight with the dog and save the human. I took him out, heavy, frozen, one of his feet was in a wet woolen sock, the other one was bare, so I used the furry boot which was thrown to the shore.”

Chernenko may have spent about 40 minutes in the frigid water, but he was pulled out in time where he shouldn’t suffer from too much long-term damage.  Doctors say he is recovering nicely, and is very thankful to Dick, and also to Karablin for the rescue.