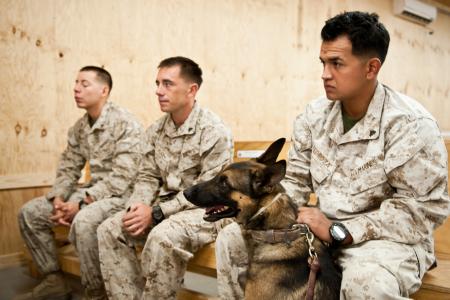 Diaz, a native of El Paso, Texas, and a military working dog handler assigned to II Marine Expeditionary Force Headquarters Group (Forward), Task Force Belleau Wood, died Sept. 28 after being wounded while rushing to the aid of a comrade during combat operations in Helmand province.

During the service, Diaz’s friends and fellow Marines, joined by Dino, Diaz’s working dog, remembered him as a family man with two young children and a contagious grin, but also as an elite Marine and a highly trained and skilled dog handler.

“He started every work day with the intention to unselfishly better his Marines by generously spreading his valued knowledge of everything he knew,” said Sgt. Benjamin Grijalva, a close friend and fellow dog handler. 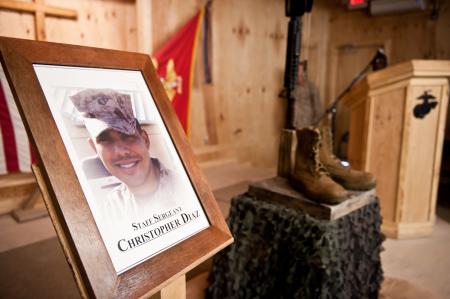 Staff Sgt. Morris Earnest, a kennel master with II MHG (Fwd.), recalled Diaz’s affection for cigars, and said his regular smokes were his way of spending time with his fellow Marines and honoring his fallen forefathers and brothers. It was a tradition that dated back to Diaz’s service in Iraq in 2005.

A third-generation Marine, Diaz grew up in El Paso, Texas, and, after graduating from La Cueva High School, enlisted in August 2003 as a military policeman.

As a working dog handler he achieved almost unparalleled professional success, including being selected to attend an advanced training program for several months in Israel. After completing the course, Diaz was one of only a handful of dog handlers in the Corps to have the qualifications he possessed. His skill and professionalism lead to him being chosen to support reconnaissance and special forces in some of the most dangerous places in Afghanistan. 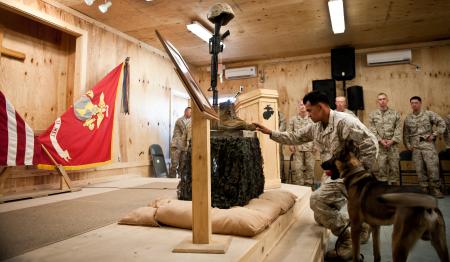 Before departing on his current deployment, Diaz faced a choice.

He and his fellow Marines with his home dog handling unit under III MHG at Marine Air Ground Combat Center Twentynine Palms, Calif., had been briefed on the missions they could expect to support in Afghanistan. Diaz and his unit were told they could expect to be in the thick of some of the most determined insurgent resistance in Helmand province. However, with his enlistment set to expire, Diaz did not have to be part of any of it, said Grijalva.

“For [Diaz], the decision was an easy one,” he explained. “Re-enlist to do what he did best – lead Marines and serve his country.”
During the chaplain’s remarks, Lt. Cdr. Steven Coates, II MHG (Fwd.) chaplain, reflected on Diaz’s choice to serve. 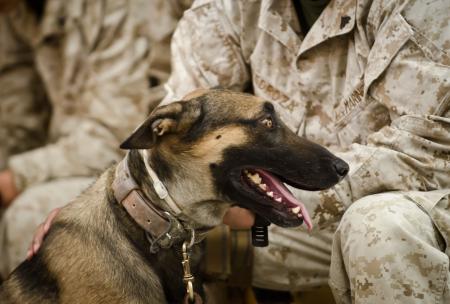 After the chaplain’s remarks, the audience came to attention as the first sergeant called roll. When he got to Diaz’s name, he called it three times. Silence held briefly before “Taps” echoed from a lone bugler. The assembled service members filed up to the boots, rifle and dog tag memorial display to pay their final respects. The last thing attendees saw as they filed out of the chapel was an open box of cigars.

“Just days before he passed, Chris handed me a cigar with his trademark smile and invited me to join him,” said Earnest. “I will never forget the special time we shared together that night, and I remember he selected a fine cigar from his stash. When I think about this now, it becomes clear why he picked only the finest cigars. It was clearly his way to honor the finest men with whom he served.”

But on this day, the men, women and the dog with whom Diaz served honored him.