How one woman saved a stray and abused dog from the streets near the Congo River, by Tracy Whittington 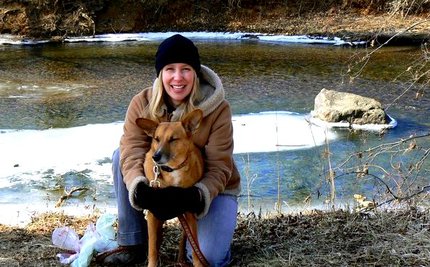 Six years ago, while serving as a U.S. diplomat in Kinshasa, Democratic Republic of Congo, I spotted a small, giant-eared, timid dog hiding in the tall grass next to the Congo River. When I walked by each day, there she would be, looking and acting like a miniature deer with her wide eyes and darting movements.  Even from a distance, I could see she had a patch of grey skin where there should have been fur, and she was painfully (hips-protruding, count-every-rib) skinny.  I asked the locals what they knew about her and found out the street kids threw stones at her, the other street dogs beat her up, and the grey skin was an old burn where Congolese soldiers had tried to set her on fire. It was all too obvious she was slowly losing her battle to stay alive, something far too common in the Congo.

So I began a campaign to catch her.  I started bringing dog treats and handfuls of food to leave on the ground for her to eat.  After weeks, I was able to get within a few feet of her, though she would never take anything from my hand. The day I decided to rescue her, I lured her to within a few inches of me with food. While she was eating, I gently slipped a dog leash fashioned into a lasso around her neck. Once she realized she was trapped, she struggled to escape, bucking and thrashing at the end of the leash.

Within a minute or so, she gave up and went limp. I scooped her up, carried her to my car and drove her home, where she lived on my balcony for several days while getting vaccinated, dewormed, and treated for fleas.  Her first night, on a soft bed, with bowls of water and food by her side, she slept for 15 hours, as if she’d never had a good, safe sleep in her life.

She actually had just had a litter of puppies, one of whom was still alive and hiding in the sewer, and I rescued him too. 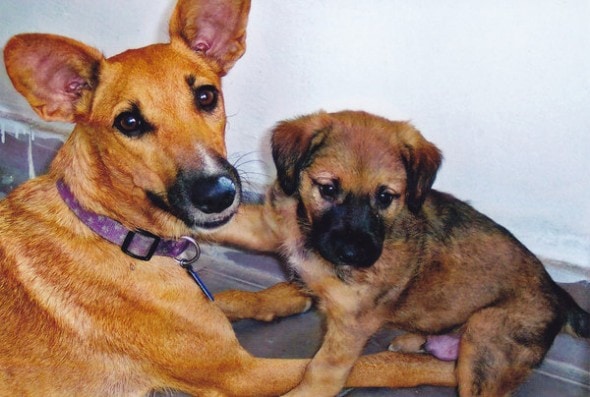 Labi, short for “la biche” (the French word for “deer”), housetrained herself in less than a month.  The vet who spayed her put her age at about one year.  Her puppy Bambi was adopted by a missionary family and the two dogs used to have play dates together every weekend. It’s been seven years and Bambi remains a happy house dog.

Today She’s a Loving Dog … Even With Cats

Although she remains less than friendly with small, yapping dogs, Labi is a sweet-tempered animal who completely won over my two dog-phobic nieces and who, despite an extraordinary prey drive, has lived peacefully for years with a succession of cats. Every person who meets her is shocked to learn of her brutal pre-pet life and to discover a street dog can be a gentle, loving companion. 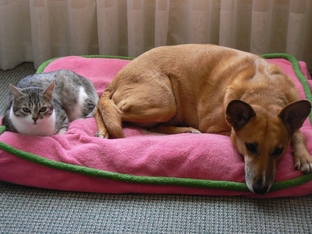 To help other street dogs like her, my husband and I have written a children’s book about her life.   A Street Dog’s Story is available on Amazon Kindle.  Labi also has her own blog, streetdogstory.com,  where she follows news of street dogs from around the world, tells the stories of other street animals, and profiles organizations working to help pups like her. She’s a great ambassador for other street dogs, and we hope her story will bring attention to their plight worldwide.  Twenty-five percent of all proceeds from her book will go to Humane Society International’s Street Dog Defender Campaign.

1 thought on “Emaciated Mother and Pup Rescued by American Diplomat”