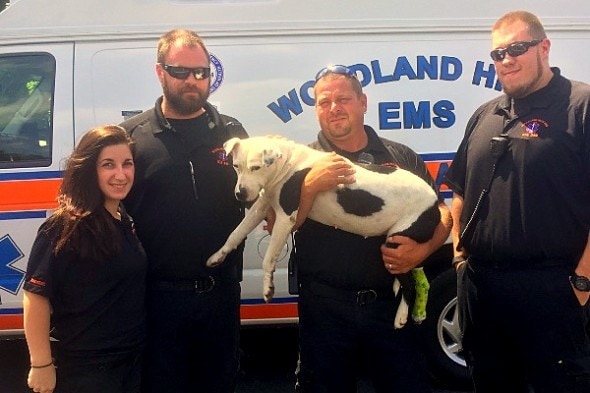 When a Pennsylvania emergency medical services team arrived to help a “woman in distress,” what they found instead was a pit bull who had jumped off a 200-foot overpass.  They immediately rushed her to a veterinarian, and even helped pay the bill.  The rest of Ophelia’s story is even more amazing.

Woodland Hills EMS was called for a woman in distress, but the message was mixed – a woman in distress was calling, about a dog.  She spotted the dog on a busy parkway, and tried to help it.  But the dog was terrified, and fled – right over the edge.

The team sped the dog to AVETS (Allegheny Veterinary Emergency Trauma & Specialty) for her initial care, which was about $700.  The EMTs paid the bill, but she was going to need even more treatment than they could afford.

Ophelia, as the EMTs called her, had suffered from severe blunt trauma.  She had several broken bones and was bleeding internally, and was taken to Pittsburgh Veterinary Specialty and Emergency Center (PVSEC).

Treatment started immediately, and little by little, Ophelia began improving.  Once she recovers from her operation, she will also be treated for heartworm disease. 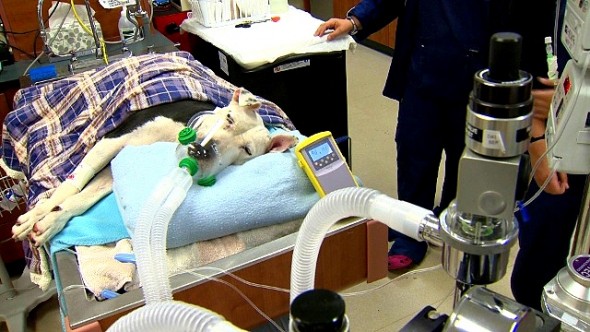 “This is one more hurdle for this brave girl but she is in good spirits and with all of the love and support she is getting we are hopeful she will continue to improve every day,” said Dr. Christine Guenther.

Surgery and additional treatment is estimated to cost around $10,000.  The EMS team created a GoFundMe page, and donations poured in.  Over $13,000 was raised in only a couple of weeks.

Two weeks ago, surgery was performed on her legs, but she spiked a fever afterward, meaning that she would need antibiotics to treat an infection.  But now she is healing up very well, and was walking soon after surgery.

Though she was found wearing a collar, Ophelia did not have tags or a microchip, and no one has come forward to claim her.  Right now she is being pampered in her foster home by Jessica, one of the paramedics who found her.  She will be in casts for a few more weeks, and then she will be spayed and treated for heartworms.  Then she will likely be put up for adoption, and hopefully this time she will land herself in loving home for the rest of her life.

Attached is a picture of Ophelia, the stray dog who fell off a bridge and was rescued by a group of paramedics from…