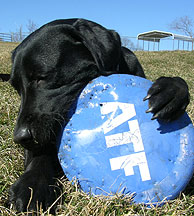 Super Bowl brings together the best teams in football, and the Bureau of Alcohol, Tobacco, Firearms and Explosives has brought its best K-9 teams to North Texas to provide security for Super Bowl XLV on Feb. 6.

“Everything’s bigger in Texas and this Super Bowl is no exception. With more than 100 specially trained personnel, ATF has more resources dedicated to this Super Bowl than in previous years,” said Dallas ATF Special Agent in Charge Robert Champion. “No one agency can secure the hundreds of thousands of fans who will be in the Dallas area this week. The
ATF canines are just one of the many tools law enforcement has in place to assure public safety.”

Handler-canine teams will conduct security sweeps at this year’s Super Bowl to locate any type of explosive, firearm or ammunition that may be in close proximity to the stadium or other venue relating to the big game.

ATF certified K9s are paired with special agents or local law enforcement officer handlers who are working side-by-side with other public safety officers to keep the football teams and fans safe. ATF has used its explosives-detecting canines at other special events including the Republican and Democratic National Conventions, the Presidential Inauguration, the G-8, the World Series, NASCAR, the 2002 Salt Lake City Olympics and of course, previous Super Bowls.

ATF’s program, which began in 1986, uses only Labrador retrievers. The dogs are supplied by the Guiding Eyes for the Blind, the Guide Dog Foundation, and Canine Companions for Independence. These specialty canines, with their handlers, attend a 10-week training program conducted at the ATF National Canine Training and Operations Center in Front Royal, Va. Upon completion of this course, the canines will be able to detect a variety of explosive compounds and materials that could be used in an explosive device. The canines can also detect firearms and ammunition and are used in the more traditional protective search and sweep operations. Once the canine and the handler complete the ATF basic training course, they begin their field work and continue to train on a daily basis.

More information on ATF and its programs can be located at www.atf.gov.