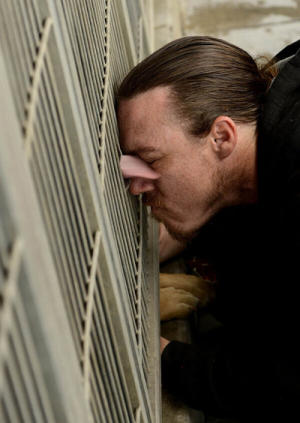 The power of social media is reuniting a dog and his owner once again. Dave Thomas was separated from his dog, Buzz Lightyear, when he was arrested and Buzz was taken to an animal shelter. Thomas didn’t have the $400 to free his dog and was spotted crying next to Buzz’s cage by a frequent shelter visitor. She snapped a picture of Thomas and Buzz that went viral on the internet and led to an overwhelming amount of support to reunite Thomas and Buzz.

Thomas was arrested in San Bernadino, California. According to Police Lt. Paul Williams on suspicion of drug possession. Thomas claims he was arrested because he failed to show up to court for speeding tickets. Thomas did have marijuana when he was arrested but has shown reporters paperwork that indicates he’s a medical marijuana patient.

When Thomas was arrested police followed protocol and had animal control officers take his dog to the shelter because at the time of the arrest no one was available to take the animal. Thomas went to see Buzz at the shelter but didn’t have the estimated $400 to free his dog. That’s when Maria Sanchez spotted Thomas crying by Buzz’s cage. Sanchez frequents the shelter on her lunch break to take pictures and raise awareness about dogs in need of good homes. Seeing Thomas, Sanchez knew she had to do something.

When Sanchez posted pictures of Thomas and Buzz on Facebook asking people for help she had no idea how much support it would garner. “It went viral,” Sanchez said. “It’s just crazy.” The word had gotten out about Thomas and Buzz, but then Sanchez realized she had no way of reaching Thomas and he hadn’t left any information at the shelter. Once again the support of dog lovers came through by sharing the photo on Facebook asking if anyone could identify the man.

Thomas was eventually tracked down and by Tuesday morning more than $2,000 of donations had come in to help Thomas and Buzz reunite. Animal control wouldn’t release Buzz until he had been neutered, which happened yesterday. A happy reunion for Thomas and Buzz is soon to happen thanks to the impact of social media and the support of animal lovers. Thomas is overwhelmed by all the support. “It’s just incredible,” he said. “I believe it’s for my dog and not me.”