Many of you are already familiar with remarkable little Faith. There were countless articles written about her, and some of her videos went viral last year. She’s headed to Afghanistan to offer moral support to wounded troops, and something tells me she is going to be quite popular. 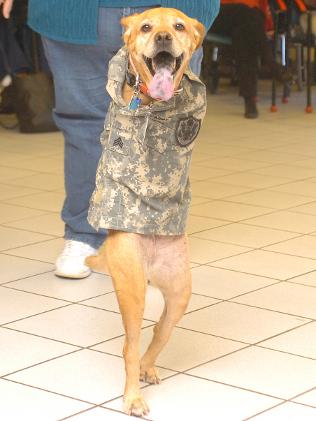 Faith was made an honorary sergeant in the US army for helping disabled veterans battling to overcome their war zone injuries. The Labrador-chow cross marches on her hind legs wearing a military jacket when she visits bases and hospitals, where soldiers have taken her to their hearts. Now there are plans to fly her to the UK if quarantine rules can be met.

Owner Jude Stringfellow said from her home in Oklahoma City: “Faith seems to inspire these young men.  It’s very emotional watching them respond to her. She shows what can be achieved against great odds. I’d love her to bring a smile to the lips of British soldiers.”

Faith was born with one front leg missing and the other severely deformed. Vets wanted to put her down but Ms Stringfellow refused. The dog’s bad leg was amputated and she was taught to stand upright by being offered peanut butter on a spoon. Ms Stringfellow said, “She then learned to walk and a vet suggested she be an inspirational dog.”

This is an earlier video of Faith for those who have not yet heard her story. It bears repeating.

25 thoughts on “Faith for Wounded Troops”