After a life of uncertainty, a Saint Bernard from Ohio found a forever home – and thanked his new family by coming to their rescue just a few short hours after his adoption. 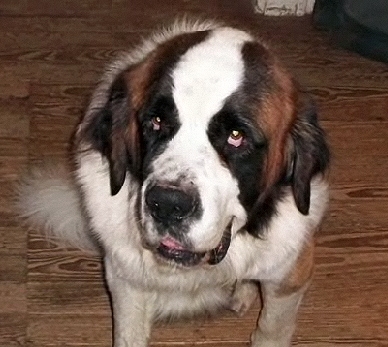 Rubert and Elizabeth Littler adopted the 135-pound dog from the Highland County Dog Pound last week. He was found wandering by  hikers in October and was in rough shape, bleeding from multiple injuries and dehydrated. A vet said he was likely attacked by a coyote.

The Littlers adopted the dog with the intention of fostering him until he was healthy. They assumed he would be moving on to a new home in the near future, but now say there is no way ‘Hercules’ is going anywhere. That’s because less than six hours after coming home, Hercules came to the rescue of his adoptive family.

Rubert Littler told The Times-Gazette that he was taking Hercules outside Wednesday night when the dog uttered a low growl before charging through a screen door. Rupert was stunned as he watched Hercules chase an intruder out of their basement. The burglar ran, but the angry canine caught up to him and manged to sink a few teeth into the man’s ankle as he jumped a fence before making his escape. Police investigated the break-in and noticed that the home’s phone and cable lines had been cut, an indication that the thief meant business. They believe he was unnerved by the element of surprise when faced with an attacking dog.

While the Littlers are obviously shaken by the experience, they say they owe a massive debt of gratitude to Hercules. And even though they already have a very full house with four dogs of their own, they say they are gladly making permanent room in their home and their hearts for their brave adopted hero.