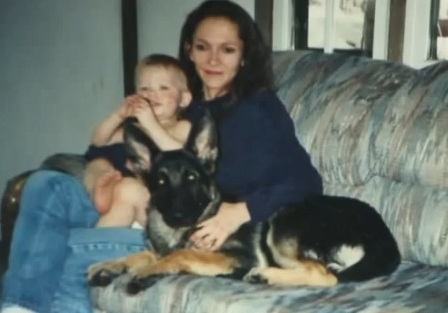 Just weeks after the enactment of Colorado’s new Dog Protection Act comes disturbing news: a Park County family’s 16-year-old dog was tragically shot and killed by an off-duty sheriff’s deputy who then hid the dog’s body.

The Brown family left their German shepherd, Shiva, at home on Saturday while they attended a wedding in Denver, and found that she was missing from the property when they returned.

They began scouring the neighborhood, calling her name. Matthew Jackman, the deputy in question, knocked on their door to give them a strange warning.

“The neighbor had come over and told him if we’d seen blood in the driveway not to be alarmed because there was a coyote that he had shot,” said owner Laura Brown.

Dumbfounded, she shot back, “That’s not a coyote, that’s my dog!”

“How could you mistake a full-blooded German Shepherd for a coyote?” she challenged.

Sunday morning, another neighbor visited the home to tell the family what he saw.

“He said ‘well the guy right there shot your dog last night, and he took him over by the mailboxes and he just dumped him.’”

He explained that Jackman had been jabbing at Shiva with a stick before going inside his home and returning with a gun. He stood over Shiva and shot her point-blank in the head.

Later on Saturday a group of kids found her body callously dumped in a ditch with a bloody pair of gloves nearby.

Even trying to take an unbiased view, how could a deputy possibly mistake a German shepherd seen at close range with a coyote? The latter weighs about 60 pounds less, and it is likely that Jackman would have seen his neighbor’s dog at least once.

Park County Sheriff Fred Wagner says the deputy was off-duty at the time, and that the department is investigating the matter.

Brown says she doesn’t wish for Jackman to be fired, but wishes he had completed the training courses on understanding dog behavior that will now be mandated within most CO law enforcement departments. This way her dog would have died in one of her family member’s arms instead of at the hands of a killer.

“She was in pain, I mean she’s old and we weren’t ready to put her down yet,” Laura said, and they certainly weren’t prepared to deal with her cold-hearted murder.