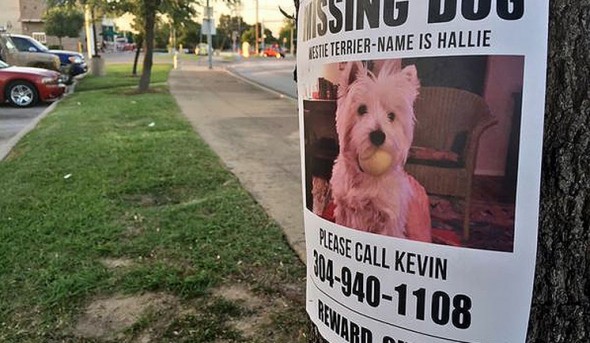 A family that had just moved to Fort Worth, Texas got a very rude “welcome to the neighborhood” when someone had stolen their car after only being in the area for a very short time.  To make matters worse, the family dog was still in the vehicle when it was stolen, and now the family is frantically searching for their missing member.

The Wilson family had just arrived in Texas when everything went down.  They came from Missoula, Montana, where car theft is not exactly an everyday thing.  So, it was no big deal to them to leave the dog in the car with it running while a quick stop into a pharmacy was made.

The vehicle was taken from the parking lot of a CVS Pharmacy near I-20 and Trail Lake Drive.  Mrs. Wilson hadn’t been away from the carn for two minutes before it was too late.

“I’m not even angry.  I’m not feeling an angry emotion.  I’m feeling despair for my dog,” said Wilson.

Mrs. Wilson was stepping out of the store, just in time to see a man pull away in her car with the dog still in it.  There was absolutely nothing she could do at that point.  Her first thoughts weren’t even of the stolen car.  She was far more worried about her dog.

“I thought, ‘My god! The man is taking my dog!’ (I) didn’t really think about the car,” said Wilson.

Fort Worth Police were contacted, and are now investigating the incident.  Hopefully, even if the car is never recovered, the dog will be.  Anyone with information on the dog or where he may be are urged to contact the Fort Worth Police.  A reward for the safe return of the dog is in place, and no questions will be asked.

“I take full credit for leaving my dog in the car with the engine running.  My mindset was Missoula, Montana and West Virginia where you could do that,” said Wilson.  “I want my dog back safe and sound.  That’s all I want.  We can buy a new car.  I don’t want to see anyone go to jail.  I just want my dog back.”

Yet again, another reason why it’s often best to simply leave your dog at home.  This way you don’t run the risk of having your dog trapped in an overheating car, and they are less likely to be stolen.