A heartbroken 5-year-old girl devastated by the theft of her therapy dog received the best possible news today when her beloved companion was returned. In a mysterious development, “Millie” was found sitting on the family’s front porch by Andrea’s father at around 3:30 a.m. last evening.

While nobody knows exactly what transpired since Millie’s disappearance, Andrea’s mother believes that pressure from the media – and a subsequent social media public awareness campaign – prompted the dog’s abductors to return her before they could be identified.

A Kansas woman says her daughter is distraught after witnessing the theft of her therapy dog. Stolen from her front yard in broad daylight by someone driving a white, four-door car, Millie is still missing, and her family says a reward is being offered for her safe return. 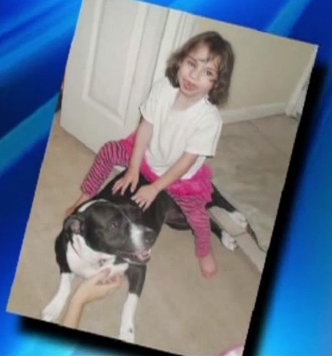 Andrea Taylor suffers from cerebral palsy, a nerve disorder, and is legally blind. Her parents say she is listless in Millie’s absence. The dog gave her confidence, and made hard days easier.

“She wasn’t ever going to be a normal child,” says Lana Taylor, Andrea’s mother. “When Millie came along she was able to have a little more independence. Outside, she was able to run with her siblings.”

Millie also alerted the family if Andrea needed help. “Sometimes with a house full of five kids we can’t hear her and Millie could alert us Andrea needed help she would either bark or go back and forth to get our attention,” said Lana.

The children were playing when they say someone in a white, four-door car stopped in front of their house, called the dog, and sped off after she jumped in the car.

“It just happened in an instant,” Lana said. “They were all in a panic. They know how important this was to Andrea.”

She says Andrea has been crying at night and rarely sleeps. “She absolutely loves Millie,” she said. “She has always been a good night’s sleeper. She’s not sleeping at night, she’s crying all night long.”

The family is pleading for Millie’s abductors to return her. They are offering a small cash reward. Anyone with information should contact the Hutchinson police department at 620-694-2834.