The Bradbury family was beside themselves after hearing that the shelter their dog was staying at had been on fire, and their dog was nowhere to be found.  This past Christmas, the family got a wish come true.  Leo was found safe and sound, and has now been returned to his family.

Sixty dog in total were lost in the fire at the Manchester Dog’s Home, which is a dog shelter and boarding kennel.  A true tragedy to be sure.  You can bet the Bradbury family knows that they are far luckier than most affected by the fire.

The family is just so overjoyed that Leo is home safe and sound.  They say for him, things seem to be back to normal.

“Leo is brilliant, he still tries to escape all the time and he still has a little cough left over from a respiratory infection after the fire,” said Dawn Bradbury.  “He does have a new habit of barking at thin air too, which he never did before, but other than that he’s fine.”

Leo is being treated as top dog now.  His Christmas stocking took the place of honor amongst the Bradbury kids’ and he was even given a special dinner.

“Leo was a major part of the Christmas plan this year. He got his stocking and dinner of turkey and gravy too, said Dawn.”

At first Leo was not going to be released to his family, because Dawn had no way of proving that he was their dog.  She waited around a shelter all day, hoping to track down Leo’s former human.  Eventually that person was found, and did vouch for Dawn and said she and her family were the rightful owners.  A very emotional Dawn was very thankful to all who helped. 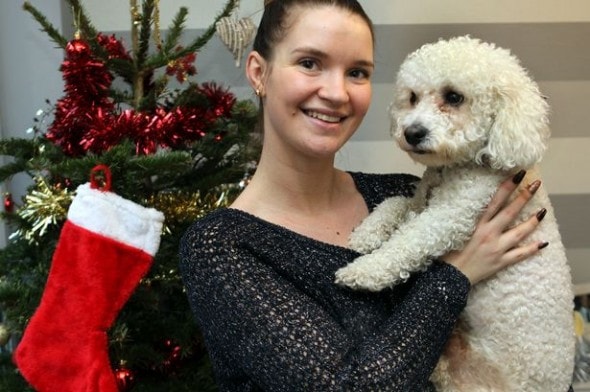