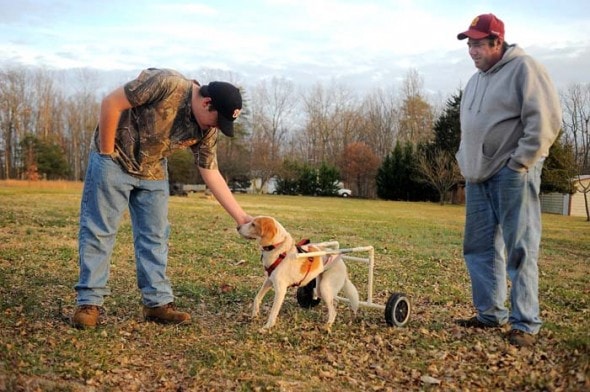 The Lukens family has fallen on hard time financially. One thing they won’t give up on despite their financial burdens is there dog Charlee.

Charlee has been with the Lukens family for 13 years and this summer she started having trouble putting weight on her back legs. It was also at this time that Brian Lukens lost his job and his wife Vicky started working two part-time jobs to try to make ends meet. Eventually though the family had to short sale their home they’d lived in for 22 years in Spotsylvania County, Virginia. The couple even had to file for bankruptcy.

A former neighbor helped the family pay for several visits to the veterinarian, but the news wasn’t good. The vet told the Lukens it might be time to put Charlee down. The Lukens weren’t ready to give up on Charlee though. “She’s still our baby,” said Brian. “I couldn’t see being here without her. As long as she’s not in pain, and she can get up and do her business, I don’t see any point in putting her down.”

Charlee was doing well through mid-November, and then she was having trouble getting up. Brian and his son Robert went to the vet who said it might be time to consider putting her down, and both men cried like babies. Brian was determined to find a way to make things better for Charlee.

A friend suggested Brian look into a doggy walker. After looking online Brian found the walkers were too expensive for him to buy, but thought he might be able to build one. Using PVC pipe, an axle and wheels from his neighbor’s old grill, an old sheet, and a strap from a cooler and a harness Brian put together a doggy walker. “It’s nothing fancy, but it works,” said Brian.

Toby Folks, the Lukenses’ old neighbor who has helped with vet bills, can’t believe the difference the walker has made for Charlee. “When I went to see her, I just fell apart,” she said. “It was wonderful to see this dog walk.” The Lukenses’ new neighbor Tracy Gist is just as impressed, especially at how much every member of the family loves Charlee. The walker Gist says demonstrates that, “It’s ingenuity and love for the animal.”