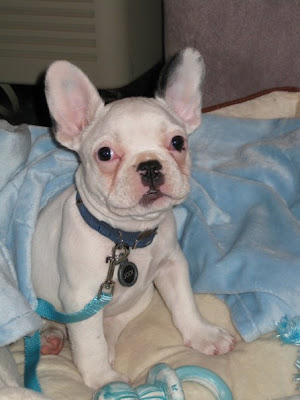 The phone jarred around 7AM, never a good thing.  A short while later Michael says, “It’s Jodi, Melissa has him back at the emergency vet.  They’re saying he needs surgery; it will cost about $4000.  She doesn’t have that money; we don’t have that much money to lend her.  It’s either surgery or she will have to put him down.  He can’t move his back legs.  She says she can’t do it alone and wants to know if we’ll come.  They’ll wait ’til we get there.”

“Of course we’ll be there.”  Out the door, into the car, neighbor called to make sure they can cover our dogs since it will most likely be hours until we get back home.  We set off to drive the 50+ miles to be with Melissa and Jodi.  How does one woman, our girl, handle having to make a decision like that again?  And again.  First with Dash, then with Connor and now Jodi.  Jodi is only two years old.  Her funny Frenchie….4000…who has that sort of money for a surgery?  And how does one deal with the sense of failure that you just can’t afford to do everything that can be done?  Of course we’ll be there.

It took longer than we would have hoped; traffic around Pittsburgh, well never mind.  We got there and were directed to a room, opened the door to find Melissa laying on a blanket next to Jodi, her face swollen from hours of sobbing over her dog.

And then we sat while she tormented and we hugged her.  I Reiki’d Jodi.  My hands warmed; he felt so vital and yet along his back I could feel his tension and the discomfort.  They had examined him when first arriving, given him pain meds through a cath in his front leg.  And, so we waited while she finally came to the terrible decision that he would have to be put down.  We stayed with Jodi, while she walked out to tell the front desk she needed the consent forms and they said they would send someone straight back to her.

We waited a long while again.  She texted her boyfriend who is the one person Melissa would have wanted there with her, but sadly Pete started his new job that same day.  Sad timing.  Frequent messages flying between fingers was the best he could do to support her when he couldn’t be there.  And we waited some more.  Jodi becoming more sore and a bit confused as to what was going on as his meds wore off.

Melissa went out to the desk a second time.  We waited again.  When we had been with her for an hour and a half, Michael asked if she wanted him to go out to chat with the people.  Melissa declined the offer.  I asked her a short while later if she would like me to go out to talk with them.  She agreed.

I have found in really tense, difficult situations, that the more quiet I am when I am discussing the situation with people who are failing to care to help me,  the more lethal I must sound.  I find that it gets much more action than standing there and blasting them with anger or shrieking at the top of my voice.  That sort of behavior gives them false permission to ignore me because of bad behavior on my part.  So, that’s how I handled them.  They stared at me with wide eyes and swore the vet would be back to us in a few minutes.

Almost immediately, a tech appeared saying she needed to take Jodi back to be examined again.  And, then the vet appeared.  She is the sort who spends all her time in an emergency situation.  Not very warm, terse, specific in her communication and clinical in delivering her message.  “Here’s the situation.  He needs surgery.  You have the estimate for it.  If you don’t have the money which we understand is a very large amount, we can offer care credit which would allow you to pay it back over six months.”  We all confirmed that it wouldn’t be possible to meet the obligation.  And then the bombshell:

“There is another option.  We can do the surgery today.  He will be healthy and able to get around.  You would relinquish him to us.”  What is going on?!

Melissa sobs, “I was a vet tech, I know how this works, who here wants my dog?!”  The vet stood still.  She said, “You know I can’t tell you that.  It’s confidential.  But Jodi is a very viable two year old French Bulldog.  He can have an MRI today and we will know exactly which disc needs to be repaired.  He will be healthy and have a good life.  Of course, if it is your desire to put him down, we will agree with your wishes.”  What went unsaid, but could clearly be heard from her body language was, “and I hope you’ll do the right thing and give this dog a chance!”  What she said when Melissa stared to cry is, “I’ll step out and give you some time to think it over.”

I asked, “Doctor, can I talk with you a few minutes and give my husband and Melissa some time together?”  She agreed immediately.  While she and I talked in the hall, I could hear the muffled sobs and angry sounds from Melissa and the quiet, but specific, sounds coming from Michael.

“I’m confused about this relinquishment option,” I said to the vet, “What Melissa said she was told was that Jodi needed surgery which would cost, X, and that you all couldn’t guarantee the outcome.  Now she’s being told that someone here will absorb the cost and take over the dog.  Why would anyone want to pay that amount of money for a dog whose outcome can’t be guaranteed?”

She replied, “I don’t know how she has come away with the idea of the surgery couldn’t be guaranteed, he’s an excellent candidate.  Jodi has feeling to his back legs.  This is a congenital issue that happens a lot with French Bulldogs, it’s correctable.  It wasn’t caused by a trauma.  When it happens due to trauma, it completely changes the case, so we can’t always know how things will turn out.  In a case like this, we use the MRI to show exactly which disc needs to be repaired.  When we alleviate the pressure, the spine can function normally.  With correct after care, Jodi will be fine. We can help him today.”

To think that Jodi could live and have a good quality of life?!  This was happy news I never thought I’d hear.  But the horrible part is that Melissa had to sign him away never to see him again.  She continued, “I’ve worked here seven years.  I can tell you that relinquishment is not an option we offer many times; I think in my time here I’ve only offered it three times.  No one here is attempting to steal a person’s loved pet from them.  But there are times when it can be offered for an animal who has a great chance at life.  Still, I know how hard it is for the owner to consider it.”

I asked, “What will you tell me about the person who wants to absorb this cost on Jodi’s behalf?”  She responded, “She is a very good person.  She likes small dogs.  She has met Jodi and simply says she’ll pay his bill so she can give him a good life.  We have to be very careful about these situations.  It’s highly emotionally charged. So Melissa can’t meet her.”  I understood.

I went back in, Michael had stepped out to return a work call.  Melissa was on the phone with Pete.  Clearly this choice was filling her with tons of emotions, not the least of which was anger feeling as though people were attempting to steal her dog from her.  When Michael came back in, he simply and specifically said, “You have to make a decision. You are being offered the chance to save Jodi’s life.  I hope you will take it.  Especially since relinquishment is how you got Dublin, your cat, when her original owner couldn’t afford it. But, he’s your dog and your decision.  I’ll wait outside.”  He walked out, quietly closing the door.

The emotionally charged silence was deafening. I asked if I could do anything or get her anything.  She told me she wanted us to go.  There was nothing more I could add, so I told her I loved her. “Melissa, one way or the other, you would be leaving this place without Jodi today.  But now, he’s being given a chance at continuing to live and live well.”  And with a last look at Jodi, I left as she requested.  We didn’t hear any more from her for the rest of the day. But, with the weird way we get information in this age of FB and instant messaging, we later read on her page that a friend had gone to the hospital to collect Melissa who had signed over Jodi to have the surgery and continue life with his new owner.

I am so happy for Jodi, and simultaneously so miserable for Melissa.  I’ve never felt anything so emotionally conflicting.  I know how awfully I would be handling a situation like this.  I know the gamut of emotions I would be feeling.  I know how angry I would be; how cheated I would feel.  How wronged.  How absolutely assaulted.  And, somewhere, I hope I would be feeling the small kernel of comfort that I had loved my pet enough to give it shot at a life even if it meant without me as part of it.  But, it would be small comfort.

I know that Melissa is angry but more than that she’s just overwhelmingly miserable over having to make a decision like this.  I know she wanted to do what was best for her but even more, do what was best for Jodi and knowing these two wishes couldn’t be reconciled.  Real love can be difficult.  It sometimes asks everything of us.  Asks more than we think we’re capable of giving.  And it can seem harsh, unforgiving, and simply more than we can bear, at times.

Our daughter is really wounded over this and we had no way of making it better.  But, for that little dog’s sake, the Frenchie who made us laugh we, most particularly Melissa, had to do all we could to give him a fighting chance to have a life.  And she did it.

I do know that while I’ll never get to see Jodi again, we did the right thing by championing him.  And we are very grateful that someone who was able came forward to pay his expenses and give him a new life in a new home.

We will miss you Jodi, and that will fade with time.  But, we love you, Melissa and that will never fade.  For facing the decision, for loving Jodi so much, you’ve proved once again how you are a champion for every animal with whom you have shared your life or come into contact.  For you faced a farewell of a different sort, and for that Jodi will always be grateful.