My best friend is a three-legged dog named Festus.  He may look a bit odd, but he is an inspiration. 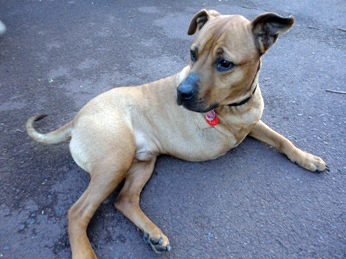 Festus was born with four legs.  His mother hid her puppies in an urban industrial park, and somehow Festus got stuck under some debris.  To free himself, he managed to chew off his own right front paw.  He also broke the other front leg and lost a toe off it.  He lost part of an ear and got a nasty gash across his nose.  He caught an upper respiratory infection and pneumonia.  Luckily, someone found him and brought him to an animal shelter.  He was nursed back to health.  Money was raised for an operation to have the rest of his leg amputated to make it easier for him to walk.

I do not think of him as handicapped or disabled.  I have always known him to have three legs, and he’s never had any problems.  I hate it when people say, “Oh, that poor, sad dog!” because there isn’t anything sad about him.  In fact, “festus” means “joyous” in Latin.  That is not where he got his name — he was actually named after a Gunsmoke character — but the joyous connotation is fitting.

I first saw Festus on a website called ‘petswithdisabilities.org.’  For a dog lover like me, the cute pictures and sad stories on this site are hard to resist.  I knew Festus was mine the minute I saw him.  When I adopted him, I worried about every step he took.  I carried him up and down the stairs.  I read everything I could about a dog with a “disability.”  I learned that a dog carries 75-percent of his weight on his front legs, so a dog with a front leg amputation has a difficult time of it.  He must lift his head, neck and entire front carriage just to take a step.  It would be like a person squatting and using one leg to propel forward.  It is exhausting.  I don’t know how he does it.  But he does.  And he never complains.

I needn’t have worried.  Dogs are not like people.  He has no consciousness of being different or of missing anything.  When a dog has a leg amputated, he figures out a way to move, because he must.  There are no psychological difficulties attached to it.  Still, people sometimes treat him like he is a freak in a sideshow.  I take offense to this, but Festus pays no mind.  A dog just does not care what you think of him.  He is much more interested in being a dog, sniffing around for other dogs’ smells, stuff like that.

Today, Festus is a 6-year-old, sturdy dog of about 65 pounds.  His left front leg is so massive that we call it the Power Paw.  He looks kind of like a pit bull, or maybe a Boxer.  The shelter told me his mother was a Rottweiler, but I don’t see it.  It’s anybody’s guess.

And Festus is now a trained therapy dog.  He and I took a course and were certified, and I now take him to visit patients at health-care facilities.

When Festus steps through the door of a hospital, he is greeted with incredible responses.  For most people, it is unexpected to see a dog in a hospital.  Add the fact that he has three legs and you have got yourself a real celebrity.  No one makes fun of him in a hospital.  They gush over him.  Lots of jokes about “Is he here for his appointment?!”  Patients are cheered by him. They can identify with him.

On one of our first visits, we met an elderly, blind woman who reached out a shaky hand and starting stroking his back.  She smiled a huge smile.  She remained like this for 20 minutes.  When we left the room, a staff member told me that she had not smiled for months. 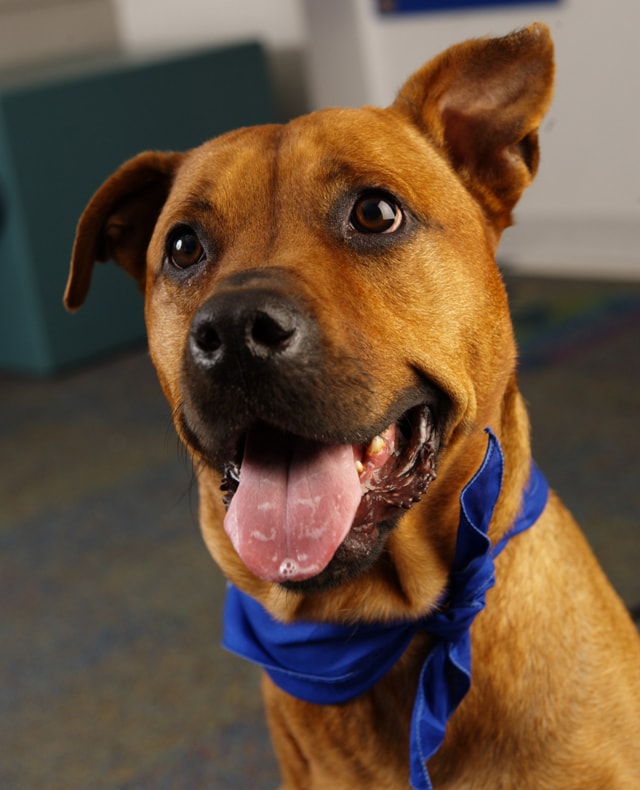 At a rehabilitation hospital, a stroke patient also reached out an unsteady hand, this time to pat Festus’ head.  The instant he touched him, Festus stopped all movement and sat stock still with his head held high.  It was amazing.  It took my breath away.  It’s as if he knows what he is doing.

I take a backseat to Festus when we go visiting.  These moments are about him, not me.  It is humbling.  And very gratifying.

Sometimes people say, “It’s so nice that you rescued him.”  I never think of it in those terms.  I simply adopted him.  In a way, he has rescued me.  Because of him, I am learning to be much less self-involved and self-conscious.  Festus is opening up new worlds to me, experiences that I never would have had if I had simply remained in my own little bubble.