JACKSON COUNTY MS — Competitions in which a dog holds a boar at bay for two minutes in a small arena have raised a ruckus in Jackson County.

Animal-rights people are afraid both the hog and the dog suffer. People who support events at Fort Bayou Ranch in Vancleave say it’s they who suffer, by being misunderstood and denied use of their land for a sport that’s sanctioned by state law. Dogs snarl, bare their teeth, snap and bark ferociously to manipulate the boar. The boars snort, butt and sometimes toss the dogs. The supporters say all that looks worse than it is, even though hog dogs often wear protective vests. Advocates say it’s a family event. Children got involved in contacting their county supervisors about it. 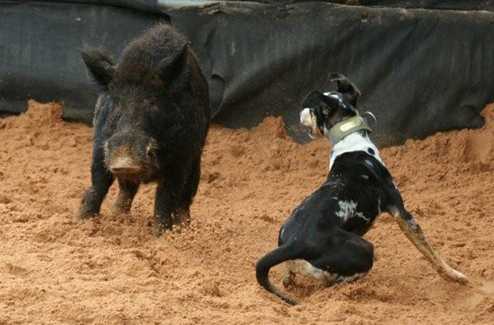 Supervisor Melton Harris said the issue was so hot he was receiving 50 to 60 e-mails a day, and “it got to where every time your BlackBerry vibrated it was something on hog dogs.”

Then the Board of Supervisors heard the issue and decided it’s OK for the group to continue holding the events on the private ranch. The board heard a building official was sent to an event, found zoning violations and felt the need to call the law because of the attitude of some of the people. The board added conditions to its permission. It required an auxiliary police officer be on the grounds at future events, and the public-address system to be turned off at 9 p.m. so people living nearby could sleep. And the board will review the permit in a year.

Melton Harris, who represents Moss Point, said opponents of the activity are misinformed. “A lady called from Hattiesburg. She was under the impression that the dogs get in there and kill the hogs,” Harris said, “like the old gladiator days when there are lions in there …. Comments about dogs injuring the hogs were not correct. And those who were alleging those things did not show up (at the hearing.)”

The vast majority of people at the hearing were in favor of the sport.

Harris said he has not been to a hog-dog bay, but he understands farm competitions. “With the baying itself, you don’t torment,” Harris told the Sun Herald. Torment would be if the dogs chased the hog around the property, he said. Harris likened the events to high school football or the NBA — contact sports. He said the ideal is no one is injured, but injuries will happen from time to time.

A constituent asked him how he knows there’s no gambling going on. Harris said he told them he doesn’t, and that there might be a friendly wager like one father betting another at a pee-wee football game.

“It doesn’t mean you condone it,” he said.

Harris said the issue of too many travel trailers on the property for the weekend events will take care of itself. He said no one wants to deal with raw sewage, and the event “would start losing people if the sewer system doesn’t work. “We don’t want to stop something that is considered a tradition, something they are accustomed to doing,” he said. “Even though they were doing it without permission.” Harris said the events had been going on for years without any problem. “If animals were being mauled, “that would be justification to shut it down.”

Supervisors Manly Barton and John McKay represent most of Vancleave.

Barton said he had calls from people who were mad at him for his vote, but all the e-mails were thanking him. Barton went to hog dog bayings when he was a kid, but not to those at Fort Bayou Ranch. He knows the people involved and said he trusts them.

Review in one year

Still, he pointed out the board will review the issue in a year. “We went out and looked at it. The hogs and dogs. It’s not what (opponents) portrayed it to be,” he said. “They didn’t want to hear the truth,” Barton said. “Not all of them, but some of them.” Barton said the county allowed people to hold rodeos on private property years ago. Now the county has a horse arena for events, but Barton said the hog dog group wants a smaller venue than the arena.

At the hearing, the board received conflicting information about the number of travel trailers on the property during an event. The county building official reported considerably more than the group owned up to. “I guarantee we’ll know next time,” Barton said. “We’ll watch it closely and make sure it’s what it’s being portrayed as.”

McKay said, “It’s a legal sport. It has been cast as inhumane, but it’s not.” McKay said he attended the World Championships at the county’s multiplex and horse arena in 2005. But he said the issue before the board wasn’t whether he liked the event. It was whether the group could hold it at a private ranch.

McKay said he dealt with some “vocal, vocal, mad people” who were against the sport, but most of the people he talked with in Vancleave weren’t. “A lady called me and said, ‘I’m going to be a lawyer and I’m going to defeat this.’ She said it was cruelty to animals, and I said it was not. “It’s no different than a rodeo where there’s bull-doggin’ and they’re twisting a cow’s neck and nobody says a word about it,” he said. “They rope a calf and jerk its feet out from under it and throw it down. I don’t support cock fights or dog fighting, but this is a legal sport and they have the right to do it, whether I like it or not,” McKay said.

He said he would be opposed to it if it were a blood sport. If a dog bites a hog’s ear, there’s blood, he said, but the dog is eliminated from the competition. McKay said the championships at the public arena were very controlled, with someone in the ring to make sure the animals stayed apart. “There may be events other places in the nation that aren’t as controlled,” he said. “But that’s the reason I wanted a policeman on the grounds. If the policeman sees animal abuse, he can stop it immediately.”

He said that goes also for gambling, or if the crowd gets rowdy.

Board President Mike Mangum voted against allowing the events at the ranch. He said 90 percent of comments at the hearing Monday had nothing to do with the issue, which was land use. “A working farm is fine, but that’s an event,” he said. Mangum said he believes a hog dog trial becomes illegal if something gets hurt. He said the earlier events violated county zoning, but when the county asked them to stop and go through the proper channels, they did. “The Littles, the Mallettes, the Inabinettes are good people,” he said. “If they say they’re going to do something, I think that’s what they’re going to do.”

Supervisor Tommy Brodnax got calls from Arkansas and Missouri supporting the sport, and only three complaints about his vote. “From what I’ve seen on TV and what everybody’s told me, there’s one dog and one hog,” he said. “He’s judged on how he bays that hog. And I don’t see anything in the world wrong with that.”

from the Sun Herald