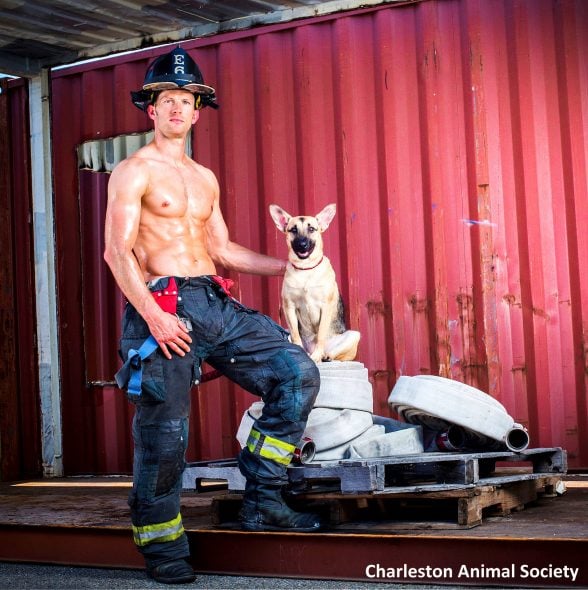 Last May, South Carolina firefighter Rob Tackett posed for the Charleston Animal Society’s 2017 calendar with Kimber, an adorable German shepherd puppy.  There was an immediate spark between them, and when the opportunity arose, Rob adopted her.

Mr. March, of the Charleston Fire Department, is an Army veteran who befriended Kimber’s original owner, Steve Hall, a former elite Marine sniper.  After returning from three tours in Iraq and Afghanistan, Steve was diagnosed with PTSD, with anxiety, flashbacks, and nightmares only assuaged because of his dog, Scout.

Unfortunately, Scout died in December 2015, leaving Steve in the lurch.  But he ended up adopting Kimber, who had been found on the side of the road as a very malnourished and bald little thing.  Just like her predecessor, she was a marvel at helping to alleviate Steve’s PTSD symptoms.

Steve offered to have cutie Kimber participate in the 2017 calendar shoot for Charleston Animal Society (who last year featured Caitlyn, the famous dog who survived a tightly taped muzzle), and Rob was designated as her partner for the day.

“Her owner and his wife told me she wouldn’t go around any guys,” Rob said. “And when I first met her she curled up in my arms, it was an instant connection. She felt safe with me.”

Rob and Steve became friends afterwards, and over summer when Steve fell ill, it was Rob he trusted to care for Kimber while he recovered.  Sadly, he didn’t.  When his health further deteriorated, Steve asked Rob to officially adopt her. 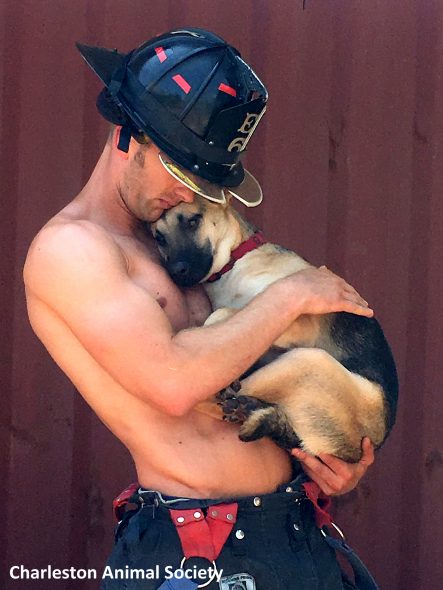 “He was heartbroken,” Rob explained. “He said, ‘My health is not where I want it to be. We can’t take care of Kimber. I don’t want her going anywhere else.’”

He dutifully agreed to make her a permanent family member, and their bond has truly blossomed over the last several months.

“I love that dog,” he said. “She is an incredibly special dog, I’ve never been around a dog like her. Just being around her makes everything easier.”

Kimber is a certified PTSD service and support dog, and Rob hopes that with further training, together they can visit other veterans and help them the way she’s been able to help her dads.

“She’s skittish around other people at first,” Rob said, noting Kimber’s abused beginning. “But when she gets comfortable she is the most loving dog in the world.”

Though the first two months of the year have already passed, you can still purchase a 2017 calendar full of beefy, fire-fighting, animal-loving hunks by clicking here. 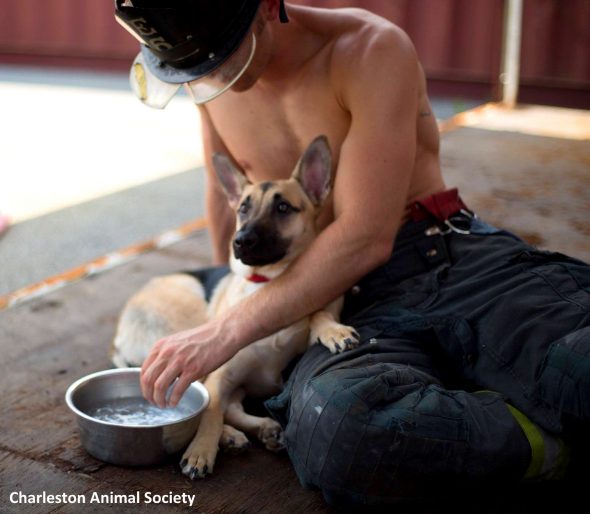