Texas firefighter Captain Scott Ledet went above and beyond the call of duty when he responded to an RV fire and pulled an unresponsive Chihuahua from her crate and administered mouth-to-mouth and chest compressions for 30 minutes.  She finally responded, and within an hour was back on her feet.

Yvette Childers was on her way to work in her RV and had stepped out for a moment when the engine burst into flames, sending fire shooting through the cab.  Her one-year-old dog, My Little Pony, was blocked off by flames in the back.

“I’m standing there watching it burn and I’m thinking, ‘Oh my god, that dog,’” Childers recalled.

As just a wee puppy, Pony survived the fertilizer plant explosion that occurred last April – Childers couldn’t let her die now.  She frantically told firefighters arriving to the scene that her dog was trapped, and they used hatchets to get inside the camper. 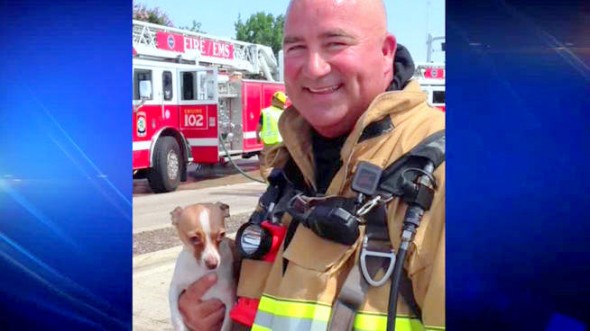 “She was in the very back of the crate, lying on her side. Her eyes were open and she was lifeless,” Capt. Scott Ledet said.  “I took off my helmet and mask off and removed her from her cage and just started doing CPR on her like I would a human.  I actually spread her mouth open and put my lips down to the bottom of her throat and was giving her mouth-to-mouth resuscitation that way.”

Chest compressions and oxygen were administered to the tiny dog, but as the minutes slowly ticked away, it seemed that Pony would never wake.  She had a seizure, but finally blinked and began gasping for air.  She was walking around within an hour.

“I’m so glad you were there because I couldn’t have taken it. You can lose everything, but not the little animal,” a tearful Childers said to her hero.

“I never thought twice about not performing CPR on the dog. It was never a question,” the dog lover confessed. 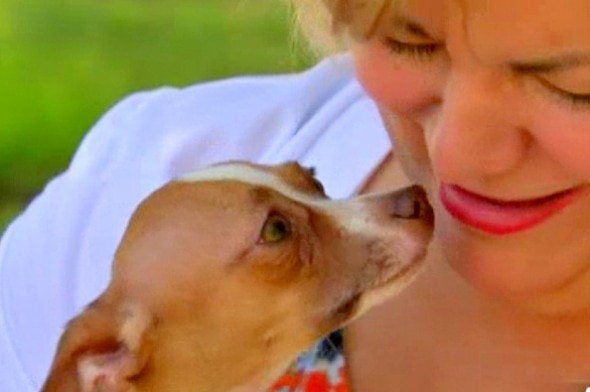 Childers and Pony were living in the RV, and now their home and most of their belongings are gone.  The American Red Cross is helping her find a new home, but she’s just grateful that she still has her girl.

“I call her the luckiest little miracle dog,” Childers said.

Friends of the family have set up a fundraiser page to help them put the pieces of their life together again.  If you would like to donate, please CLICK HERE.

“I stopped by her motel where she is staying and is doing better, a bit tired and Pony has more energy than ever,” said her friend Teresa.  “She is thankful for those who have donated and honestly has no idea how much has been contributed this far – she will be shocked when I break the news to her! (Yvette has no access to any type of internet at the moment as her electronics were burned in the RV.)”

7 thoughts on “Firefighter Revives Chihuahua After 30 Minutes of CPR”