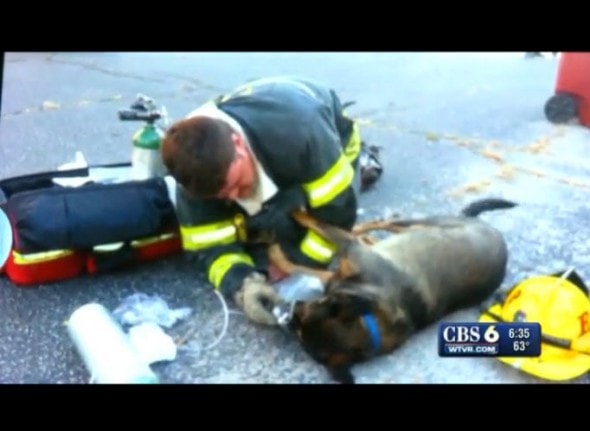 Not all Fire Rescue units carry pet oxygen masks. Last weeks when firefighters from Petersburg Fire Department in Va., pulled Keiser, an unconscious German shepherd mix from a burning home, they saved his life by improvising and using an oxygen mask designed to save a person.

While firefighters fought the flames and rescued a woman from the burning home, firefighter Josh Moore pulled what he and other rescuers thought was a dead dog. Immediately, Moore and paramedic Bubby Bish worked to save Keiser’s life.

“I figured being a large dog like he was, an adult mask should work for him and I could get it over his snout, hold it there and keep him going,” Moore told CBS6. “It felt like it took forever, but I’m thinking it took maybe five to eight minutes he finally started to move and wag his tail.”

Thanks to Moore and his improvisation, Keiser is alive today.

The dog was checked by a veterinarian and released to Petersburg Animal Control a few days later. Animal Control is caring for the pet while Keiser’s owner recovers from her second-degree burns at the hospital.

Petersburg Fire Department and Southside Virginia Emergency Crews have now placed an order to equip their ambulances and trucks with pet oxygen masks. Next time they need to rescue and save a pet’s life, they’ll be prepared.