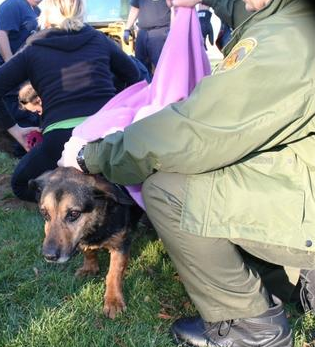 Firefighters worked for over an hour on Saturday afternoon to rescue a dog trapped in a drainage pipe in Fairfield, Connecticut.

Shadow, an 11-year-old German Shepherd-Boxer mix, was walking with his owner by Fairfield Warde High School when he slipped away and crawled into a pipe at the edge of the school’s soccer field. It soon became apparent that Shadow wasn’t able to get out of the pipe on his own.

Firefighters were called to the scene to help free Shadow. At first they attempted to send a firefighter into the pipe after the dog, but the pipe narrows and the firefighter couldn’t  reach Shadow.

Unable to reach Shadow directly firefighters had to start digging. While Shadow’s owner sat by the opening of the pipe and kept him calm firefighters used a backhoe to lift the basin’s cap off so a firefighter could enter the catch basin and reach Shadow.

Once the 1,000 pound lid was removed a firefighter used a ladder to enter the drain pipe and reach Shadow who was pulled out uninjured and handed over to his very relieved owner.