On August 11, 2013, firefighters from Punta Arenas, Chile, responded to the frantic calls of a dog owner who found her loved pet with its head trapped in the wheel rim of an old truck tire. The dog was successfully rescued. 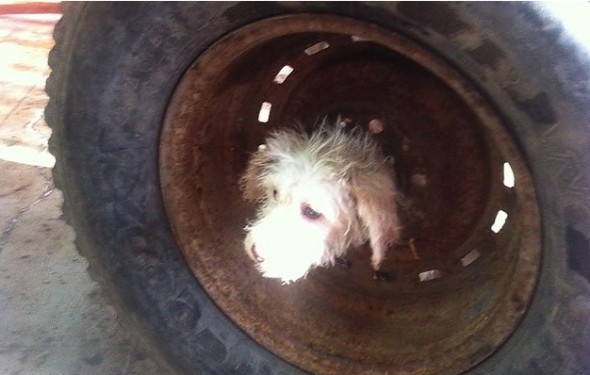 The dog is named Copito and his owner was looking for him to no avail. The woman, who lives in Jorge Montt Street, Playa Norte, found him trapped in the rim. She desperately tried to free him but couldn’t. The dog owner called local fire department and they came to the dog’s rescue.

The volunteer firefighters used hydraulic tools to cut the rim and free Copito. The canine was as frantic and scared as the owner, but once free, Copito ran to his owner’s arms and was petted and calmed.

After the ordeal Copito thanked his rescuers by running circles around the heroes and allowing the men to pet him.

This was a happy ending to a scary situation.