On June 17, 2014, Khaleesi, a ten-month old bull Mastiff from Barrington, Canada, chased a cat into a backyard near its home in Riverhead Road. In the yard, the cat hid in between the gaps of large boulders and the dog followed thinking she too could fit. The canine, a few dozen times larger than the cat wedge herself in between the gaps and became trapped.

Mary Ferguson, the pet owner, placed a call to local firefighters as soon as she caught up to her pet and found her confined in between the large rocks. 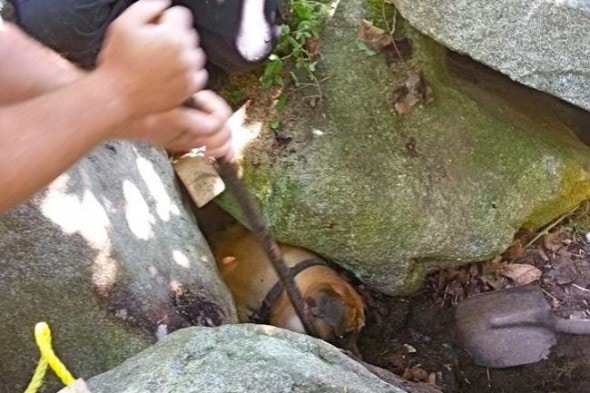 Firefighters arrived at the scene and brainstormed on how best to get Khaleesi out. With the help of shovels, pry bars and a mini-excavator borrowed from the Municipality of Barrington, the hero men worked for about two hours until the dog was pulled out to safety.

Ferguson hugged each of the firefighters that helped free her four-legged best friend.

“I don’t think I missed any of them,” she said. “I can’t thank them enough. I can’t believe what they did for me.”

The large breed dog didn’t suffer any injuries. She was scared during the rescue and when pulled she was just tired, thirsty and very dirty.

A few hours later Khaleesi was back to her usual playful self.