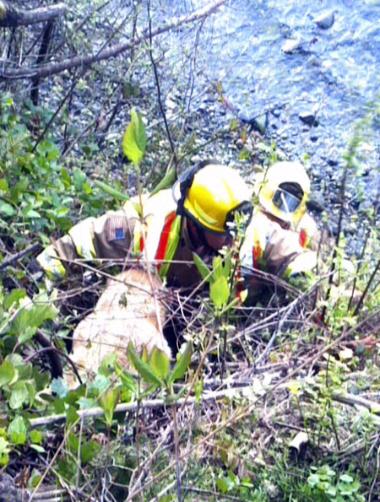 Watson has the North Kitsap Fire & Rescue firefighters to thank for rescuing him after he fell halfway down a 45-foot cliff and became stuck on a ledge. When they got him safely down on the beach he thanked them the best way he knew how, by bringing them a stick to play with.

A contractor saw the 10-year-old Golden Retriever fall down the cliff along the shores of Gamble Bay in Washington State on Tuesday. He contacted his client who called for help. Battalion Chief Ken LeMay investigated the situation and determined his crews would be able to rescue Watson quickly and safely.

Using a ladder and a safety line firefighters reached Watson. He was reluctant to leave the security of the ledge so firefighters secured him with a strong and flexible sheet they typically use to move larger patients during medical incidents. A firefighter then slowly brought Watson down to safety. The Golden Retriever was remarkably uninjured.

Once Watson was safe on the beach he picked up a stick and brought it to the firefighters’ feet. By the time Watson was brought down his family had arrived and they were able to also help express their gratitude to Watson’s rescuers. LeMay says his crew was glad to help and the rescue was a great opportunity for them to use and practice their rescue skills. “Unfortunately, we can’t always do what we did here today. But when we can, it helps us stay sharp for rescues with even higher stakes.”