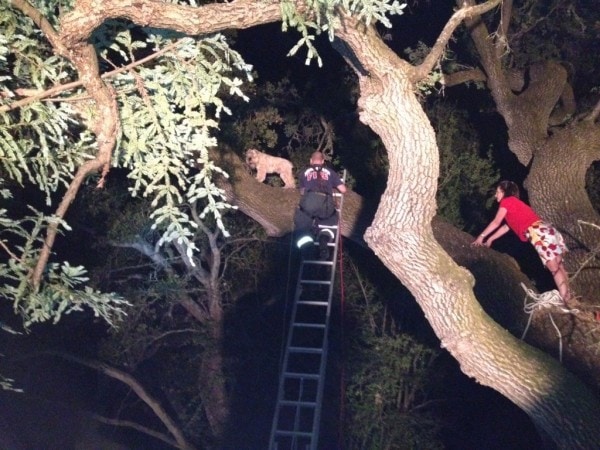 Menlo Park Fire Protection District Fire Chief Harold Schapelhouman said that in his 32 years of service, he’s never seen a rescue quite like this one. Even the dispatcher who took the emergency call was skeptical.

“The dispatchers thought, ‘Whoever it is must be wrong,'” Schapelhouman said. “I’ve never seen or heard of a dog that could climb a tree.”

On June 19, a Wheaten terrier named Guinness became stranded high in the branches of an oak tree in his yard after he treed a raccoon. Incredulous firefighters arrived to find him swaying in the branches of the tree high above a drainage channel.

Using an improvised rope and harness system and a 36-foot ladder, firefighter Tony Eggimann reached Guinness in a matter of minutes and brought him down. Guinness had frozen in place and was trembling when Eggimann found him.

Guinness was reunited with his grateful owners, shortly thereafter. They said they plan to install a fence around the tree, just in case he decides to take another climb in pursuit of local wildlife.

Schapelhouman said he has never seen a dog climb  a tree like Guinness.

“We have been asked to rescue many cats in trees,” he said. “While we have rescued dogs from pipes, culverts, under homes and many other locations closer to the ground, I have never seen or heard of a dog that could climb a tree.”